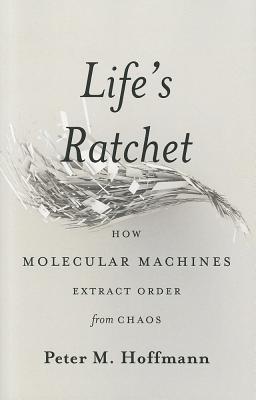 By Peter M. Hoffmann
Email or call for price.

Life is an enduring mystery. Yet, science tells us that living beings are merely sophisticated structures of lifeless molecules. If this view is correct, where do the seemingly purposeful motions of cells and organisms originate? In Life's Ratchet, physicist Peter M. Hoffmann locates the answer to this age-old question at the nanoscale.

Below the calm, ordered exterior of a living organism lies microscopic chaos, or what Hoffmann calls the molecular storm -- specialized molecules immersed in a whirlwind of colliding water molecules. Our cells are filled with molecular machines, which, like tiny ratchets, transform random motion into ordered activity, and create the "purpose" that is the hallmark of life. Tiny electrical motors turn electrical voltage into motion, nanoscale factories custom-build other molecular machines, and mechanical machines twist, untwist, separate and package strands of DNA. The cell is like a city -- an unfathomable, complex collection of molecular workers working together to create something greater than themselves.

Life, Hoffman argues, emerges from the random motions of atoms filtered through these sophisticated structures of our evolved machinery. We are agglomerations of interacting nanoscale machines more amazing than anything in science fiction. Rather than relying on some mysterious "life force" to drive them -- as people believed for centuries -- life's ratchets harness instead the second law of thermodynamics and the disorder of the molecular storm.

Grounded in Hoffmann's own cutting-edge research, Life's Ratchet reveals the incredible findings of modern nanotechnology to tell the story of how the noisy world of atoms gives rise to life itself.

Peter M. Hoffmann is a Professor of Physics and Materials Science at Wayne State University in Michigan, and the Founder and Director of the university's Biomedical Physics program. Born and raised in Germany, Hoffmann studied Mathematics and Physics at the Technical University of Clausthal, Germany.

In 1992, he came to the U.S., where he studied physics at Southern Illinois University at Carbondale. He completed an M.S. in Physics in the area of nanoscience, and received his Ph.D. from Johns Hopkins. Hoffman is the recipient of numerous awards, including the National Science Foundation Early Career Award, as well as the Richard Barber Faculty and Staff Excellence Award, the College of Science and Presidential Teaching Awards, and the Career Development Chair Award from Wayne State University.

City Book Review
“Life's Ratchet is nothing short of brilliant. With wit and literary prowess, author Peter M. Hoffmann delivers a profound message about the nature of the life within our lives. He writes with a grace and careful thoughtfulness—the Shakespeare of scientific literacy.”

Physics World, Best Books of 2012
“[A] clearly written book about molecular motors and other nanoscale structures.... It does a very good job of capturing the excitement driving current research on this increasingly important topic.”

Nature
“Life's Ratchet engagingly tells the story of how science has begun to realize the potential for matter to spontaneously construct complex processes, such as those inherent to living systems. The book is a good mix of history and the latest concepts, straightforwardly explained…. The book's important message is that there is a revolution brewing. This revolution will not tell us what matter is made of. Instead, as described in Life's Ratchet, it will tell us how matter and energy combine to make me and you.”

New Scientist
“In Life's Ratchet, biophysicist Peter Hoffmann reveals that the secret to life isn't some mysterious force. Rather, it is chaos itself. Hoffmann provides a ringside perspective on life at its most fundamental level, gained through his work on imaging and manipulating molecules.”

Werner R. Loewenstein, author of The Touchstone of Life and Physics in Mind
“Peter Hoffmann brings the universe of the very small to life. Life's Ratchet is an exciting guide to the wondrous strange nanoworld of molecules driving the machinery of life. Engaging, provocative, and profound.”

Physics Today
“[A] fascinating glimpse into recent research on molecular machines, research that lies at the intersection of biology, chemistry, and physics.... Life's Ratchet does an excellent job of conveying the tension between mechanical descriptions of molecular machines...and the chemical perspective.... I highly recommend this book to scientists in the fields of biophysics and nanoscience as a readable introduction to a broad variety of topics in those areas.”

The Scientist
“What distinguishes life from its nonliving ingredients? How could life arise from the lifeless? These questions have vexed philosophers sand scientists for more than 2,500 years. Bio-besotted physicist Peter Hoffmann wrote Life's Ratchet to get to the beating heart of the matter. After a lively, lucid grand tour of the controversy's history...Hoffmann arrives at modern molecular biology and the technological breakthroughs, such as atomic force microscopy, that enable us to see the very atoms of a cell.... A masterwork of making the complex comprehensible, this book would make a smashing freshman biology textbook—and that's a compliment.”