The Mysterious Stranger and Other Stories (Mass Market) 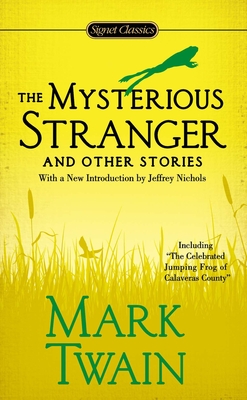 The Celebrated Jumping Frog of Calaveras County
The Facts Concerning the Recent Carnival of Crime in Connecticut
The Stolen White Elephant
Luck
The £1,000,000 Bank-Note
The Man That Corrupted Hadleyburg
The Five Boons of Life
Was It Heaven? Or Hell?
The Mysterious Stranger

The Mysterious Stranger and Other Stories unites nine of master American humorist Mark Twain’s most accomplished works. From tall tales of con men’s tricks, such as the classic that brought him instant fame, “The Celebrated Jumping Frog of Calaveras County,” to a man with no money (other than a £1,000,000 banknote that no one can cash), to an exposé of greed and hypocrisy in perhaps his greatest short story, “The Man That Corrupted Hadleyburg,” Twain showcases his notorious humor—skewering policemen, clergymen, politicians, bankers, and others—and displays his changing attitude toward human nature. The finale is the novella The Mysterious Stranger, a rarity for Mark Twain in which he turns his sardonic, freewheeling wit on eternal evil in a distant time and place—and conjures a memorable, tormenting conclusion.

Mark Twain was born Samuel Langhorne Clemens in Florida, Missouri, in 1835, and died in Redding, Connecticut, in 1910. In his person and in his pursuits, he was a man of extraordinary contrasts. Although he left school at twelve, when his father died, he was eventually awarded honorary degrees from Yale University, the University of Missouri, and Oxford University. His career encompassed such varied occupations as printer, Mississippi riverboat pilot, journalist, travel writer, and publisher. He made fortunes from his writing, but toward the end of his life he had to resort to lecture tours to pay his debts. He was hot-tempered, profane, and sentimental—and also pessimistic, cynical, and tortured by self-doubt. He lives in American letters as a great artist, the writer whom William Dean Howells called “the Lincoln of our literature.”

Jeffrey L. Nichols has been Executive Director of the Mark Twain House & Museum since 2007. He joined the museum in 2001 after having served as Director of Education and Visitor Services for the Barnum Museum in Bridgeport, Connecticut. Mr. Nichols serves as a member of the Board of Directors of the Milford Historical Society in Milford, Connecticut, and the Board of Directors of the New Haven Museum. He has served as a board member and Speakers Chair for the Connecticut League of History Organizations. Mr. Nichols is a graduate of the Bank Street College of Education in New York City, where he earned an M.S. degree in Museum Education. He received a B.A. in History and Education from Southern Connecticut State University, and an M.B.A. from the University of New Haven.

Howard Mittelmark is a writer, editor and book critic living in New York. He is co-author of How Not to Write a Novel.