If I'm Being Honest (Hardcover) 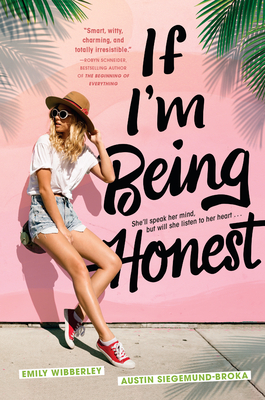 Cameron Bright's reputation can be summed up in one word: b*tch. It's no surprise she's queen bee at her private L.A. high school--she's beautiful, talented, and notorious for her brutal honesty. But when she slips up in front of her crush, Andrew, any affection he may have had for her quickly fades. To win him over, Cameron resolves to "tame" herself, much like Shakespeare's infamous shrew, Katherine. If she makes amends with everyone she's ever wronged, Andrew will have to take notice. Thus, Cameron begins her apology tour with Brendan, the guy whose social life she single-handedly destroyed. At first, Brendan isn't so quick to forgive, but slowly he warms to her when they connect over a computer game he's developing. To Cameron's amazement, she actually enjoys hanging out with Brendan; he appreciates her honesty in a way Andrew never did, and she's left wondering: maybe you shouldn't have to compromise who you are for the kind of love you deserve.

Praise for If I'm Being Honest:

"This delightfully feminist rom-com has characters that feel like friends and will surely appeal to fans of Sarah Dessen."--Buzzfeed

"Cameron may be a mean girl, but she's also smart, self-aware and willing to do the hard work necessary to earn her happy ever after -- and that makes her heroine material in my book."--NPR.com

"The authors use 'The Taming of the Shrew' as an effective framing device to examine modern ideas of feminism, which leads to a profound character arc and the essential message of how to claim your mistakes and do better."--The Washington Post

“This modern teen rom-com is everything I wanted and more—smart, witty, charming, and totally irresistible. A delight from beginning to end!”—Robyn Schneider, bestselling author of The Beginning of Everything

“‘Sweet and sharp’ doesn’t just describe geeky Brendan and feisty Cameron, but also this utter delight of a book. It’s the fresh take on the Bard (and rom-coms!) I was waiting for.”—Rachel Hawkins, New York Times bestselling author

"If I'm Being Honest puts a frehs, feminist spin on The Taming of the Shrew, with a main character who won't be tamed as she navigates shifting friendships, challenging family dynamics, and unexpected love."--Joy McCullough, author of the National Book Award nominee Blood Water Paint

"A valuable addition to the contemporary realistic fiction genre. The message that being kinder does not mean compromising who you are, but rather unveiling the better and more authentic version of one's self, is admirable. A refreshing mean-girl transformation story akin to 10 Things I Hate About You."--Kirkus Reviews

"The Shakespeare-in-high-school story line is always popular, and Cameron's quest for redemption is given depth by her complicated family. A frothy drama with plenty of layers."--Booklist

"Wibberley and Siegemund-Broka’s punchy prose and deft (mis)handling of Shakespeare make for an entertaining read on their own, but the authors’ real strength lies in their treatment of Cameron and her friends, both new and old. While most of these characters aren’t exactly likable, they are all so complex and thoroughly developed that we can’t help but root for them—and see ourselves in them—as they work through the drama and the expectations that come with senior year."--BookPage

"Loosely based on Shakespeare's The Taming of the Shrew, this is a delightfully sweet and positive tale of redemption, self-discovery, and true love."--Brightly