Prince of Outcasts (A Novel of the Change #13) (Paperback) 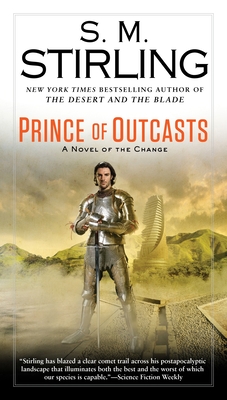 “[An] epic series,”* the Novels of the Change by New York Times bestselling author S. M. Stirling chronicle a postapocalyptic landscape of medieval and mystical monarchies ruling and warring across a world where mysterious Powers removed advanced technology. A new alliance has been forged between the High Kingdom of Montival and the Empire of Japan, but at the cost of a lost prince...

John Arminger Mackenzie wanted to be a troubadour, but fate made him the son of the King of Montival. His sister Princess Órlaith will deservedly inherit the throne of the High Kings, and it will pass on to him only in the event of her death, leaving the young prince on an unknown path to discover his true role in the family.

The opportunity to prove his mettle comes when John’s ship, the Tarshish Queen, is caught in the fierce storm raised against the enemies of the alliance. When the clouds recede and the skies clear, John and his crew find themselves on the other side of the Pacific, in the island chains of the Ceram Sea, fighting to survive against vicious pirates and monstrous creatures of the deep while meeting new allies and mysterious enemies of this world and another.

Now Prince John must seize his birthright and lead his people in battle against the darkest forces man and nature can conjure against them.

S. M. Stirling is the author of many science fiction and fantasy novels. A former lawyer and an amateur historian, he lives in the Southwest with his wife, Jan.

Praise for the Novels of the Change

“[A] richly realized story of swordplay and intrigue.”—Entertainment Weekly