The Singularity Is Nearer (Hardcover) 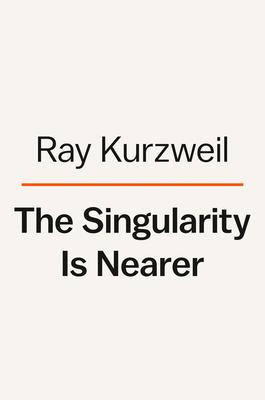 Since it was first published in 2005, Ray Kurzweil's The Singularity Is Near and its vision of the future have been influential in spawning a worldwide movement with millions of followers, hundreds of books, major films (Her, Lucy, Ex Machina), and thousands of articles. During the succeeding decade many of Kurzweil's predictions about technological advancements have been borne out, and their viability has become familiar to the public through such now commonplace concepts as AI, intelligent machines, and bioengineering.

In this entirely new book Ray Kurzweil brings a fresh perspective to advances in the singularity—assessing the progress of many of his predictions and examining the novel advancements that, in the near future, will bring a revolution in knowledge and an expansion of human potential. Among the topics he discusses are rebuilding the world, atom by atom with devices like nanobots; radical life extension beyond the current age limit of 120; reinventing intelligence by expanding biological capacity with nonbiological intelligence in the cloud; how life is improving with declines in areas such as poverty and violence; and the growth of technologies such as renewable energy and 3-D printing, which can be applied to everything from clothes to building materials to growing human organs. He also considers the potential perils of biotechnology, nanotechnology, and artificial intelligence, including such topics of current controversy as how AI will impact unemployment and the safety of autonomous cars, and "After Life" technology, which will reanimate people who have passed away through a combination of data and DNA.

Ray Kurzweil is the author of the New York Times bestseller The Singularity Is Near and the national bestseller The Age of Spiritual Machines, among others. One of the leading inventors of our time, he was inducted into the National Inventors Hall of Fame in 2002. He is the recipient of many honors, including the National Medal of Technology and Innovation, the nation's highest honor in technology. He lives in Boston.

"Ray Kurzweil is the best person I know at predicting the future of artificial intelligence."
—Bill Gates

"Not everything that Kurzweil predicts may come to pass, but a lot of it will, and even if you don't agree with everything he says, it's all worth paying attention to."
—The Philadelphia Inquirer

"[Ray Kurzweil] has a way of tackling seemingly overwhelming challenges with an army of reason."
—Rafael Reif, president, MIT

"Kurzweil paints a tantalizing—and sometimes terrifying—portrait of a world where the line between humans and machines has become thoroughly blurred."
—The Boston Globe