The Hour of Our Death: The Classic History of Western Attitudes Toward Death Over the Last One Thousand Years (Paperback) 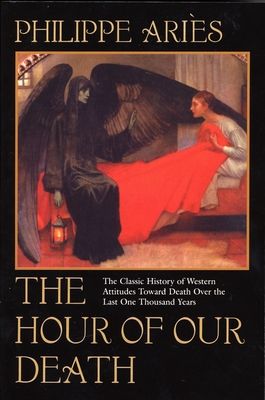 This remarkable book—the fruit of almost two decades of study—traces in compelling fashion the changes in Western attitudes toward death and dying from the earliest Christian times to the present day. A truly landmark study, The Hour of Our Death reveals a pattern of gradually developing evolutionary stages in our perceptions of life in relation to death, each stage representing a virtual redefinition of human nature.

Starting at the very foundations of Western culture, the eminent historian Phillipe Ariès shows how, from Graeco-Roman times through the first ten centuries of the Common Era, death was too common to be frightening; each life was quietly subordinated to the community, which paid its respects and then moved on. Ariès identifies the first major shift in attitude with the turn of the eleventh century when a sense of individuality began to rise and with it, profound consequences: death no longer meant merely the weakening of community, but rather the destruction of self. Hence the growing fear of the afterlife, new conceptions of the Last Judgment, and the first attempts (by Masses and other rituals) to guarantee a better life in the next world. In the 1500s attention shifted from the demise of the self to that of the loved one (as family supplants community), and by the nineteenth century death comes to be viewed as simply a staging post toward reunion in the hereafter. Finally, Ariès shows why death has become such an unendurable truth in our own century—how it has been nearly banished from our daily lives—and points out what may be done to “re-tame” this secret terror.

The richness of Ariès's source material and investigative work is breathtaking. While exploring everything from churches, religious rituals, and graveyards (with their often macabre headstones and monuments), to wills and testaments, love letters, literature, paintings, diaries, town plans, crime and sanitation reports, and grave robbing complaints, Aries ranges across Europe to Russia on the one hand and to England and America on the other. As he sorts out the tangled mysteries of our accumulated terrors and beliefs, we come to understand the history—indeed the pathology—of our intellectual and psychological tensions in the face of death.

Philippe Ariès was an important French medievalist and historian of the family and childhood. He is also the author of Centuries of Childhood, which was translated into English in 1962. He died in Paris in 1984.

“This book represents a remarkable collection of historical aphorisms. It is a classic that should be read by all serious students of death and dying.”—Darrell Chase, University of Memphis

“Philippe Aries has provided us with an extraordinary historical account of the perception and experience of death and dying. . . . This book . . . demands serious attention. . . . Please read this remarkable book. . . .The book is a magnificent contribution to society.”—Journal of Religious Gerontology

“Aries has once again given us something of which probably no other historian. . . is capable: an absolutely magnificent 1,000-year panorama of an extremely elusive, yet fundamental, human concern.”—The New Republic

“A great work of historical reconstruction...that one immediately recognizes as seminal.”—Psychology Today

“Aries meanders through the long, mazelike corridors of his theme like an insatiable collector, relishing every suggestive find, taking turns at random, and spinning interpretations of everything he sees. . . . A monument to its subject.”—The Saturday Review

“A scholarly study which is very appropriate for junior, senior, and graduate level university students in courses on the sociology and history of death.”—R. Stephen Schwartz, Winona State University

“A classic in the field of the history of dying and death.”—Nathan Kollar, St. John Fisher

“A gorgeous, amazing book that will give me many hours of education and entertainment.”—Pat Crane, San Antonio College

“An excellent look at death as seen through the ages.”—Philip G. Patros, South Connecticut State University