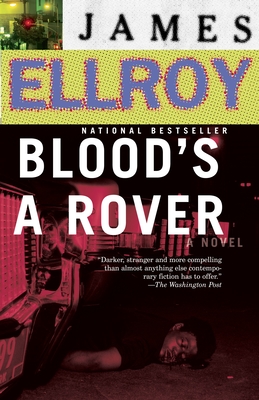 This is book number 3 in the Underworld USA Trilogy series.

The internationally acclaimed author of the L.A. Quartet and The Underworld USA Trilogy, James Ellroy, presents another literary noir masterpiece of historical paranoia.

A rip-roaring, devilishly wild ride through the bloody end of the 1960's. It's dark baby, and hot hot hot.

Martin Luther King assassinated. Robert Kennedy assassinated. Los Angeles, 1968. Conspiracies theories are taking hold. On the horizon looms the Democratic Convention in Chicago and constant gun fire peppers south L.A. Violence, greed, and grime, are replacing free-love and everybody from Howard Hughes, Richard Nixon and J. Edgar Hoover to the right-wing assassins and left-wing revolutionaries are getting dirty. At the center of it all is a triumvirate: the president’s strong-arm goon, an ex-cop and heroine runner, and a private eye whose quarry is so dangerous she could set off the whole powder keg. With his trademark deadly staccato prose, James Ellroy holds nothing back in this wild, startling and much anticipated conclusion to his Underworld USA trilogy.

James Ellroy was born in Los Angeles in 1948. He is the author of the L.A. Quartet: The Black Dahlia, The Big Nowhere, L.A. Confidential, and White Jazz, and the Underworld U.S.A. Trilogy: American Tabloid, The Cold Six Thousand, and Blood’s A Rover. These seven novels have won numerous honors and were international best sellers. He is also the author of two collections, Crime Wave and Destination: Morgue! and two memoirs My Dark Places and The Hilliker Curse.  Ellroy currently lives in Denver, Colorado.

"Darker, stranger and more compelling than almost anything else contemporary fiction has to offer."--Washington Post

"Absorbing and satisfying. . . Every page has at least one passage that's so snappy you want to reply it like a song."--Seattle Times

"Wild and brilliant, dazzling and funny . . . The plotting [is] fiendish and intricate . . . Ellroy's descriptions of violence remain powerful and slo-mo vivid."--Los Angeles Times

“Readers who love their noir blood-red will be giddy over Blood’s A Rover, the bang-up conclusion to James Ellroy’s Underworld USA trilogy . . . Ellroy’s prose is spare and riveting [and] his plot is hardball start to finish.”—USA Today

“A high-water mark in the career of one of America's best historical novelists.”—Denver Post

"Brilliant . . . There are no soft edges to this novel."--Minneapolis Star-Tribune

"Ellroy employs a huge cast and hyper-pulp prose to create a convincingly horrific universe run by the F.B.I., the Mob, and a host of other sinister organizations."--The New Yorker

"[This] amounts to the hit-man theory of history . . . It's an outrageous, exhilarating, unpretty sight, and it's ingeniously plausible."--Boston Globe

"Another cocktail of speculative pop-pulp fiction, conspiracy-theorist wet dreams and a beguiling alternative history. Fans will be pleased as rum punch."--Time Out, New York

“The four-page intro has more acts of violence than hours of prime-time TV. The first word of the first chapter is ‘heroin.’. . Raymond Chandler, the founding father of hardboiled noir and one of Ellroy’s heroes, would have agreed with this approach.”—New York Post

“Fascinating. . . . Ellroy contextualizes expertly, bringing everyone from a swish Leonard Bernstein to a randy Redd Foxx to a junkie Sonny Liston onto his lurid playing field.”—Pittsburgh Post-Gazette

“I was hooked on the first page . . . By the last page . . . I picked my jaw up from the floor and quietly closed the book. Wow.”—Randy Michael Signor, Chicago Sun-Times

“Exhilarating. . . . A snitch epic, a history observed by the bad men and women who shaped it.”—Portland Oregonian