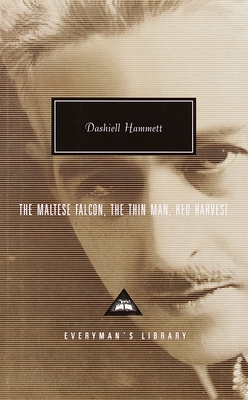 The three classic novels published here in one volume are rich with the crisp prose, subtle characters, and intricate plots that made Dashiell Hammett one of the most admired writers of the twentieth century.

A one-time detective and a master of deft understatement, Hammett virtually invented the hard-boiled crime novel. In The Maltese Falcon, Sam Spade, a private eye with his own solitary code of ethics, tangles with a beautiful and treacherous woman whose loyalties shift at the drop of a dime. The Thin Man introduces Hammett's wittiest creations, Nick and Nora Charles, who solve homicides in between wisecracks and martinis. And in Red Harvest, Hammett's anonymous tough-guy detective, the Continental Op, takes on the entire town of Poisonville in a deadly war against corruption.

"Dashiell Hammett is a master of the detective novel, yes, but also one hell of a writer."—Boston Globe

”Hammett was spare, hard-boiled, but he did over and over what only the best writers can ever do. He wrote scenes that seemed never to have been written before.”—Raymond Chandler

”Hammett’s prose was clean and entirely unique. His characters were as sharply and economically defined as any in American fiction.”—The New York Times

”As a novelist of realistic intrigue, Hammett was unsurpassed in his own or any time.”—Ross Macdonald

”Dashiell Hammett’s dialogues can be compared only with the best in Hemingway.”—André Gide

”Hammett is one of the best contemporary American writers.”—Gertrude Stein

Dashiell Samuel Hammett was born in St. Mary’s County. He grew up in Philadelphia and Baltimore. Hammett left school at the age of fourteen and held several kinds of jobs thereafter—messenger boy, newsboy, clerk, operator, and stevedore, finally becoming an operative for Pinkerton’s Detective Agency. Sleuthing suited young Hammett, but World War I intervened, interrupting his work and injuring his health. When Sergeant Hammett was discharged from the last of several hospitals, he resumed detective work. He soon turned to writing, and in the late 1920s Hammett became the unquestioned master of detective-story fiction in America. In The Maltese Falcon (1930) he first introduced his famous private eye, Sam Spade. The Thin Man (1932) offered another immortal sleuth, Nick Charles. Red Harvest (1929), The Dain Curse (1929), and The Glass Key (1931) are among his most successful novels. During World War II, Hammett again served as sergeant in the Army, this time for more than two years, most of which he spent in the Aleutians. Hammett’s later life was marked in part by ill health, alcoholism, a period of imprisonment related to his alleged membership in the Communist Party, and by his long-time companion, the author Lillian Hellman, with whom he had a very volatile relationship. His attempt at autobiographical fiction survives in the story “Tulip,” which is contained in the posthumous collection The Big Knockover (1966, edited by Lillian Hellman). Another volume of his stories, The Continental Op (1974, edited by Stephen Marcus), introduced the final Hammett character: the “Op,” a nameless detective (or “operative”) who displays little of his personality, making him a classic tough guy in the hard-boiled mold—a bit like Hammett himself.