The Consciousness Instinct: Unraveling the Mystery of How the Brain Makes the Mind (Hardcover) 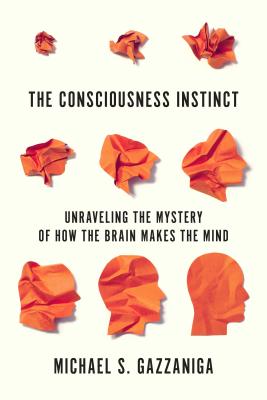 “The father of cognitive neuroscience” illuminates the past, present, and future of the mind-brain problem

How do neurons turn into minds? How does physical “stuff”—atoms, molecules, chemicals, and cells—create the vivid and various worlds inside our heads? The problem of consciousness has gnawed at us for millennia. In the last century there have been massive breakthroughs that have rewritten the science of the brain, and yet the puzzles faced by the ancient Greeks are still present. In The Consciousness Instinct, the neuroscience pioneer Michael S. Gazzaniga puts the latest research in conversation with the history of human thinking about the mind, giving a big-picture view of what science has revealed about consciousness.

The idea of the brain as a machine, first proposed centuries ago, has led to assumptions about the relationship between mind and brain that dog scientists and philosophers to this day. Gazzaniga asserts that this model has it backward—brains make machines, but they cannot be reduced to one. New research suggests the brain is actually a confederation of independent modules working together. Understanding how consciousness could emanate from such an organization will help define the future of brain science and artificial intelligence, and close the gap between brain and mind.

Captivating and accessible, with insights drawn from a lifetime at the forefront of the field, The Consciousness Instinct sets the course for the neuroscience of tomorrow.

Michael S. Gazzaniga is the director of the SAGE Center for the Study of the Mind at the University of California, Santa Barbara. He is the president of the Cognitive Neuroscience Institute, the founding director of the MacArthur Foundation’s Law and Neuroscience Project, and a member of the American Academy of Arts and Sciences, the National Academy of Medicine, and the National Academy of Sciences. He is the author of many popular science books, including Tales from Both Sides of the Brain. He lives in California.

A Kirkus Reviews Best Book of 2018

"Mr. Gazzaniga does a better job of tackling the problem [of how neural activity gives rise to consciousness] than innumerable philosophers and neuroscientists before him . . . [He] displays a rare ability to combine breadth and depth of scientific learning with good, grounded philosophical judgment. As a result, The Consciousness Instinct could be the clearest and most compelling attempt to demystify the mind yet written." —Julian Baggini, The Wall Street Journal

"[Gazzaniga is] one of the greatest neuroscientists living today . . . [The Consciousness Instinct] is a window into the mind of one of the greats. It is a rare opportunity to watch a scientific champion grapple with perhaps our most formidable mystery." —Eliezer J. Sternberg, The Washington Post

"Gazzaniga is a bold scientist . . . He guides readers through neurology, biology and psychology, discussing the origin and neural underpinnings of language or the mechanism of facial recognition . . . Engaging." —Douwe Draaisma, Nature

"Unquestionably one of the top experts in his field . . . This is a book for readers of all ages who are intrigued by consciousness and how it works. As he has done in previous books, Gazzaniga easily draws readers into one of the most fascinating conversations taking place in modern science." —Kirkus (starred review)

"[Michael S. Gazzaniga] adopts a philosophical approach in this insightful book . . . He also refreshingly grounds the work in real experimental data, revealing himself to be an intelligent mental explorer and master syncretist. Gazzaniga’s accessible, well-organized arguments are bound to provoke deep metathoughts, and readers should find his treatise delightful." —Publishers Weekly (starred review)

"Can the part of us that knows things actually know itself? 'What is consciousness?' can be a dizzying question, but Michael Gazzaniga offers an answer that’s exciting and stimulating. One of the great pleasures of this book is watching Gazzaniga's own brain at work. His writing takes us to unexpected places. If there’s such a thing as a stream of consciousness, he takes us to the headwaters." —Alan Alda

"An invigorating and mind-expanding narrative on the science and philosophy of consciousness. With good-natured humor, clear and unpretentious prose, and an eye for deep ideas and fascinating phenomena (many of them discovered in his own research), Michael S. Gazzaniga enlightens us about some of the deepest questions the mind is capable of asking." —Steven Pinker, Johnstone Professor of Psychology, Harvard University, and author of How the Mind Works and The Stuff of Thought

"The Consciousness Instinct is a fun and informative read about a topic that is often written about in ways that are either boring or incomprehensible. Gazzaniga was one of the first scientists in modern times to dare talk about consciousness. He's been at it for five decades, and keeps coming up with new and interesting ideas. Your consciousness will be raised." —Joseph E. LeDoux, Henry and Lucy Moses Professor of Science at New York University and Director of the Emotional Brain Institute

"Like the magician pulling a white rabbit out of a black top hat, Michael Gazzaniga pulls sheer consciousness out of the jungle of 87 billion neurons in the brain. In his quest to understand consciousness, that great mystery of the mind/brain, he offers refreshingly novel and provocative ideas, which he shares with the reader in his own inimitable and engaging style." —Endel Tulving, Professor Emeritus, University of Toronto

"Following in the pioneering footsteps of Herbert Simon’s Architecture of Complexity and Marvin Minsky’s Society of Mind, Michael S. Gazzaniga brings us a democracy of consciousness. This part-historical, part-autobiographical telling of ingenious experiments reveals the uncanny plurality of self-awareness. Inspired by the Darwinian insight that populations of organisms struggle to assert their supremacy over of the worlds in which they live, Gazzaniga describes how single neurons and neural networks compete to signal their understanding of the cognitive micro-worlds in which they function, and how every module is a voice that in combination produces that enigmatic chorus we describe as consciousness." —David Krakauer, President and William H. Miller Professor of Complex Systems, Santa Fe Institute

"Understanding the mind-brain relationship has intrigued humans for millennia, but progress has fallen short of the mark, particularly regarding consciousness. The genius of The Consciousness Instinct is that it brings to the mind-brain discussion new perspectives ranging from evolutionary biology (i.e. how life emerged in a lifeless world) and engineering to the mental gymnastics necessary to understand quantum mechanics, all leavened by advances being made in the brain and cognitive sciences. It is a clarion call for a much broader view of the road ahead. For me, reading a book more than once is a rare occurrence, but this book was the exception and I felt amply rewarded for doing so." —Marcus E. Raichle, M.D., Alan A. and Edith L. Wolff Distinguished Professor in Medicine, Washington University

"We should all be grateful that Michael Gazzaniga has not quit his effort to get us to think about hard problems. In The Consciousness Instinct he deals with the history of efforts to understand what it means to be conscious and also unconscious or not conscious. To understand how the meaning of being alive and also how the wave and quantum accounts of light illuminate consciousness, you will have to read this volume. For all who care about psychology, the trip is worth it." —Michael Posner, Professor Emeritus of Psychology, University of Oregon