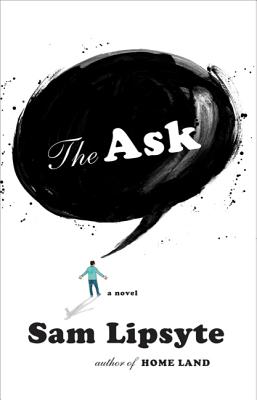 A searing, beautiful, and deeply comic novel by a young American master

Milo Burke, a development officer at a third-tier university, has "not been developing": after a run-in with a well-connected undergrad, he finds himself among the burgeoning class of the newly unemployed. Grasping after odd jobs to support his wife and child, Milo is offered one last chance by his former employer: he must reel in a potential donor a major "ask" who, mysteriously, has requested Milo's involvement. But it turns out that the ask is Milo's sinister college classmate Purdy Stuart. And the "give" won't come cheap.

Probing many themes or, perhaps, anxieties including work, war, sex, class, child rearing, romantic comedies, Benjamin Franklin, cooking shows on death row, and the eroticization of chicken wire, Sam Lipsyte's The Ask is a burst of genius by an author who has already demonstrated that the truly provocative and important fictions are often the funniest ones.

Sam Lipsyte was born in 1968. He is the author of the story collection Venus Drive (named one of the top twenty-five books of its year by the Voice Literary Supplement) and the novels The Subject Steve and Home Land, which was a New York Times Notable Book and received the first annual Believer Book Award. He is also the recipient of a Guggenheim fellowship. He lives in New York City and teaches at Columbia University.

Praise for The Ask

“If you’ve heard anything about Sam Lipsyte, you’ve probably heard that he’s funny. Scabrously, deliriously, piss-yourself funny (his characters would no doubt find a dirtier, and funnier, way of putting it), drawing audible snorts even from the kind of people, such as the people in his novels, who are way too cool to laugh out loud . . . Lipsyte’s prose arrows fly with gloriously weird spin, tracing punch-drunk curlicues before hitting their marks—or landing in some weird alternate.” —Jennifer Schuessler, The New York Review of Books

“Lipsyte shakes his comic cocktail of sarcasm and bitter impotence to eloquent effect: briefcases on wheels are “luggage for people not going anywhere,” and a Manhattan salad bar consists of “go-goo for the regular folk, these lumpy lumpen lunches.” Milo is repulsive, hilarious, and devastatingly self-aware, but it is his country that is Lipsyte’s real subject.”      —The New Yorker

“So let’s read Lipsyte and rejoice; let’s celebrate the laugh-producing Milo Burkes who are all too rarely brought to us by brave and bitter men—let’s celebrate the canny, well-educated yet perpetually failing furtive Internet onanists, the dark, half-crippled, doughnut-gobbling man-apes of the literary world, who cast their lumpen shadows across the rest of us. These are the kind of unlikeable, lovable protagonists we miss; these are the self-loathing, mediocre secret geniuses who can set our people free.” —Lydia Millet, The New York Times Book Review

“[The Ask] is a biting, bilious and often brilliant book . . . It started, for me, as a comic, bad-boy outing on Mr. Toad's Wild Ride. It concludes somewhere much darker and richer than a theme park. ‘Heavens to Betsy,’ I murmured when I finished. ‘What a book.’” —Karen Long, The Plain Dealer

“Lipsyte’s brand of absurdity is deeply rooted in the now. The recession, text messaging, reality TV—all are up for grabs. What’s particularly effective is Lipsyte’s acerbic yet subtle approach . . . But he’s never simply bitter; one can always sense a yearning in this book, even at its most acidic moments . . . Precision and painstaking craft have granted Lipsyte complete authority in The Ask, his most acidic and empathetic work to date.” —Kimberly King Parsons, Time Out New York (five stars)

“Sardonic, brilliant . . . Lipsyte skewers everything from precious preschools to academia, displaying an effortless grace and style all his own.” —People (three-and-a-half stars)

“The riffs on fatherhood, work, and sex in Sam Lipsyte’s unsparingly comic novel The Ask explode like a string of firecrackers—so funny you might lose an eye.” —Vanity Fair

“One of the greatest black-humorists alive, Lipsyte has gone unnoticed for far too long. With his third novel, about the painfully hilarious adventures of a failed painter in a dead-end job, he should finally get the acclaim he deserves.” —Details

“[The] gift is Lipsyte’s writing: a chewy, corrosive, and syntactically dazzling prose style that doesn’t so much run across the page as pick it up and throttle it. A-” —Leah Greenblatt, Entertainment Weekly

“Acrid, hilarious, and hard to put down.” —The Must List, Entertainment Weekly

“It’s not easy to write a really funny book about such anxiety-producing topics as love, death, failure and our currently terrifying economy, but that’s exactly what Sam Lipsyte has accomplished with his terrific new novel, The Ask . . . This novel isn’t afraid to show the darker side of life, but while The Ask can be a bone-chilling read, it somehow still makes you laugh out loud.” —The Observer’s Very Short List

“If you're the sort of person who underlines amusing or thought-provoking lines in books, you best gird yourself, as Lipsyte is an inexhaustible fount of eloquent prurience, deftly mingling high- and low-mindedness.” —Rob Harvilla, Village Voice

“With this novel, Mr. Lipsyte has proven himself to be one of the most unapologetic voices of contemporary literature. He mines the sexual frustration of Philip Roth, combines it with the paranoia of Don DeLillo and fills the space in between with a cast of characters as absurd and enigmatic as anything in a Thomas Pynchon novel . . . The Ask is a hilarious book about failure; a scathing unhappy comedy obsessed with a culture that’s obsessed with obsessions.” —Michael Miller, The New York Observer

“There’s probably not a living American writer who has so comprehensively mined the comic possibilities of that particular anguished, hapless combination of the overeducated and the underachieving as Sam Lipsyte. Against all odds, his heroes refuse to succeed, and they and we are rewarded with the endlessly entertaining spectacle of their nonstop humiliation.” —Jim Shepard, Bookforum

“Another savage, hilarious black comedy from Lipsyte . . . Once again, Lipsyte creates a main character whose lacerating, hyper-eloquent wit is directed both outward at the world—sardonic commentary on parenthood, class privilege, sexuality, the working world, education, ideas of Americanness and much more—and inward; Milo spares himself no degradation, no self-loathing, nothing. As it goes on one can’t help noticing, beneath the fevered playfulness, a deeply earnest moral vision akin to that of Joseph Heller or Stanley Elkin. The author’s most ambitious work yet—a brilliant and scabrously entertaining riff on contemporary America.” —Kirkus Reviews (starred review)

“Lipsyte’s pitch-black comedy takes aim at marriage, work, parenting, abject failure (the author’s signature soapbox) and a host of subjects you haven’t figured out how to feel bad about yet. This latest slice of mucked-up life follows Milo Burke, a washed-up painter living in Astoria, Queens, with his wife and three-year-old son, as he’s jerked in and out of employment at a mediocre university where Milo and his equally jaded cohorts solicit funding from the “Asks,” or those who financially support the art program. Milo’s latest target is Purdy Stuart, a former classmate turned nouveau aristocrat to whom Milo quickly becomes indentured. Purdy, it turns out, needs Milo to deliver payments to Purdy’s illegitimate son, a veteran of the Iraq War whose titanium legs are fodder for a disgruntlement that makes the chip on Milo’s shoulder a mere speck of dust by comparison. Submission is the order of the day, but where Home Land had a working-class trajectory, this takes its tone of lucid lament to the devastated white-collar sector; in its merciless assault on the duel between privilege and expectation, it arrives at a rare articulation of empire in decline.” —Publishers Weekly (starred review)

“Lipsyte’s third novel, a darkly humorous story of sons and fathers, is both his most realistic and convulsively hilarious to date . . . Lipsyte’s razor-sharp eye filets dying America (a fractiously culty daycare; a reality cooking show set on death row; the scarified plaguescape of a lonely first generation social networking site), throwing off brilliant riffs and exhilaratingly steep dives from frontal lobe to perineum, sauced with yummy dollops of white liberal guilt . . . Yet for all his wit, Lipsyte’s narrator is not above it all but deeply, messily down in it: the casual miracles of parenthood, the deepening thrum of mortality, the grim perdurance of a shaky marriage, ‘warm with that feeling of wanting a feeling that maybe had already fled.’ Seriously funny, Lipsyte sits alongside such illustrious Daves as Gates, Eggers, and Foster Wallace on the self-conscious shelf, but with a heartfelt brilliance all his own. —David Wright, Booklist (starred review)

“Lipsyte endows his narrator with a sharpness of wit and dexterity of language arguably unmatched in contemporary fiction.” —Alice Gregory, More Intelligent Life

“The Ask is a novel deeply in tune with the asks and the gives of the current economy, and with a city whose boroughs are full of the walking wounded . . . It comes out in the author’s supremely distinctive voice, particularly his knack for brutal curlicues of prose—extravagant linguistic flourishes that only make the lonely truths hidden inside more piercing.” —Dan Kois, New York Magazine

“The Ask eschews the shopworn conventions of modern fiction; it offers a rare and welcome departure from today’s contrived, über-plotted novels written for the big screen. Here is a satire in its purest form . . . Lipsyte possesses the syntactical dexterity of a top brain surgeon . . . [and] manages, with breathtaking success, to render Milo’s life so plausibly and with such sureness of hand and that the novel’s wildest developments seem as inevitable as they are believable . . . You put down The Ask with that sinking feeling of loss that only the best reads can engender.” —Kirk Davis Swinehart, Chicago Tribune

“Sam Lipsyte’s way with words is exceptional, his ability to turn a phrase dazzling . . . [The Ask] is powerful and certainly speaks to our times.” —Carlo Wolff, The Boston Globe

“This melancholy book about a failed college fund-raiser is surely one of the best novels of the year.” —Frank Bures, Star Tribune

“2010 will also be remembered as the year when, thanks to a single book, the literary merit of that somewhat neglected beast, the comic novel, could no longer be denied: Sam Lipsyte’s relentlessly and hilariously brilliant The Ask.” —Geoff Dyer, The Guardian “Sam Lipsyte wants you to shit your pants. By that I mean parts of The Ask are so sphincter-looseningly funny that you will want to invest in some adult undergarments before reading it. As the author of several previous novels, including the Believer Book Award–winning Home Land, Lipsyte has cultivated a well-earned reputation as our preeminent chronicler of the absurd. There isn’t a funnier author working today. . . The carefully nuanced look at our own world, of our phobias and obsessions and stupidities, forces us to understand them all too clearly. The Ask is a hilarious book that poses serious questions and never, ever feels slight.” —Andrew Ervin, The Believer