Unfollow: A Memoir of Loving and Leaving the Westboro Baptist Church (Hardcover) 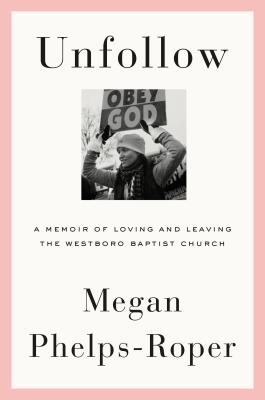 At the age of five, Megan Phelps-Roper began protesting homosexuality and other alleged vices alongside fellow members of the Westboro Baptist Church in Topeka, Kansas. Founded by her grandfather and consisting almost entirely of her extended family, the tiny group would gain worldwide notoriety for its pickets at military funerals and celebrations of death and tragedy. As Phelps-Roper grew up, she saw that church members were close companions and accomplished debaters, applying the logic of predestination and the language of the King James Bible to everyday life with aplomb—which, as the church’s Twitter spokeswoman, she learned to do with great skill. Soon, however, dialogue on Twitter caused her to begin doubting the church’s leaders and message: If humans were sinful and fallible, how could the church itself be so confident about its beliefs? As she digitally jousted with critics, she started to wonder if sometimes they had a point—and then she began exchanging messages with a man who would help change her life.

A gripping memoir of escaping extremism and falling in love, Unfollow relates Phelps-Roper’s moral awakening, her departure from the church, and how she exchanged the absolutes she grew up with for new forms of warmth and community. Rich with suspense and thoughtful reflection, Phelps-Roper’s life story exposes the dangers of black-and-white thinking and the need for true humility in a time of angry polarization.

Megan Phelps-Roper was raised in the Westboro Baptist Church: the Topeka, Kansas religious group known internationally for its daily public protests against members of the LGBT community, Jews, the military, other Christians, and countless others. As a child, teenager, and early twenty-something, she participated in the picketing almost daily and spearheaded the use of social media in the church. Dialogue with “enemies” online proved instrumental in her deradicalization, and she left the church and her entire way of life in November 2012. Since then she has become an advocate for people and ideas she was taught to despise – especially the value of empathy in dialogue across ideological lines. She lives in South Dakota.

"[Phelps-Roper] paints a nuanced portrait of the lure and pain of zealotry . . . She urges all of us to reach out in good faith to those we disagree with, to try to understand the experiences and motives that have shaped their stances, and to realize that grievous behavior isn’t necessarily driven by ill intent." —Ruth Padawer, The New York Times Book Review

"[A] scrupulous, anguished account of ‘loving and leaving’ the church, a satisfying story" —James Lasdun, The London Review of Books

"Unfollow is an exceptional book: a loving portrait of a fanatical organization . . . Love, it seems, for Phelps-Roper, is not only the answer, but the one thing she knows for sure." —Grace McCleen, The Times (London)

“The story of how Phelps-Roper extricated herself (and one of her sisters) from Westboro unfolds like a suspense novel, so I won't spoil it here. Suffice to say, leaving was wrenching, despite its clear necessity. And life after Westboro was disorienting — liberated but also adrift, Phelps-Roper had to face the guilt over "years I had wasted hurting people in a misguided effort to serve an image of a God that seemed less real all the time."” —Kate Tuttle, NPR

"[Phelps-Roper] describes a struggle not only to untangle herself from twisted bonds of family and faith but to establish a private self, behind the weaponized media persona she had grown up inflicting on the godless world . . . The delusion behind the rise of the Information Age was the same as the delusion that the end of cold war conflict . . . would necessarily breed enlightenment. Phelps-Roper supplies a helpful corrective, explaining how the biblical literalists of the Westboro Baptist Church navigated the mass media . . . Westboro was not afraid of popular culture; the church was popular culture." —Tom Scocca, The New York Review of Books

“Phelps-Roper’s intelligence and compassion shine throughout with electric prose ... She admirably explicates the worldview of the Westboro Baptist Church while humanizing its members, and recounts a classic coming-of-age story without resorting to cliché or condescending to her former self.” —Publishers Weekly (starred review)

"Phelps-Roper is a masterful writer. She writes movingly about the searing pain of separation from those she continues to love, and beautifully about how freeing herself from a theology of hate has given her life greater meaning and purpose. In a time of growing intolerance, Unfollow is essential reading." —BookPage (starred review)

“Rarely do you come across someone with the courage and clarity of Megan Phelps-Roper. From her story, we can learn things sorely needed in our age: empathy, openness, and how we can best build bridges across divided lines.” —Chris Anderson, Head of TED

“Megan Phelps-Roper is one of the most inspiring women I have ever met. If you want to see how a girl raised on religious fanaticism and sectarian hatred can be cured by the power of honest reasoning, read this book.” —Sam Harris, author of The Four Horsemen and The End of Faith

“Megan Phelps-Roper finds a way to tell the story of the girl she was raised to be from the perspective of the woman she became, without rewriting history or losing touch with the earnestness that made everything in her world seem OK, if not downright righteous, at the time. Despite a fundamental transformation of epic proportions, Megan’s core, her soul, remains the same throughout: kind, passionate, and open. Her process is wildly brave and incredibly thoughtful and this book gives us incomparable insight into a world we all, and yet none of us, know. It will leave you holding your heart.” —Sarah Silverman, actress and comedian, host of I Love You, America with Sarah Silverman

“Megan’s story embodies the power of patience, listening, and empathy in this time of extreme intolerance and hatred of one's ideological enemies. It is, quite simply, exactly what the world needs right now.” —Mark Duplass, actor and film director

“Megan Phelps Roper has guts—maybe more guts than can comfortably be contained within one adult human. First, as a member of the scary Westboro Baptist Church, she had the guts to get into the faces of people she disapproved of, gays and Jews and less fiery Christians, and tell them why God hated them. Then - and this is where you and I come in - she had the guts to listen and to think, and to decide that everything she had built her life upon was wrong. This is a beautiful, gripping book about a singular soul, and an unexpected redemption.” —Nick Hornby, author of High Fidelity and How to Be Good

“Unfollow speaks eloquently to our divided times: the tale of a young girl born into a family whose name is a byword for bigotry and how she grew into a compassionate young woman, leaving her family behind and forging an entirely new understanding of the world and her place in it. Full of insight, thoughtfulness and vivid detail, it is also the debut of a gifted new writer. For anyone who enjoyed Hillbilly Elegy or Educated, Unfollow is an essential text, a testament to the fact that there is no-one immune to childhood indoctrination, but also to the ever-present possibility of profound change.” —Louis Theroux, documentary filmmaker for the BBC

“Megan Phelps Roper is a beautiful writer, and her journey—from the Westboro Baptist Church to becoming one of the most empathetic, thoughtful, humanistic writers around—is exceptional and inspiring. I met Megan shortly after she left her church. She said, ‘I want to do good, but I don’t know how.’ With Unfollow, she’s figured out how.” —Jon Ronson, author of So You’ve Been Publicly Shamed and Them: Adventures with Extremists