In the Light of What We Know (Hardcover) 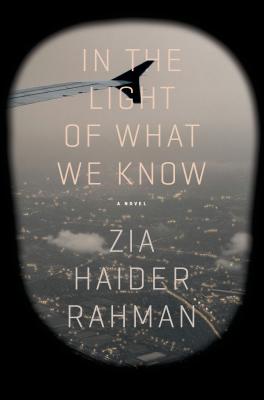 A bold, epic debut novel set during the war and financial crisis that defined the beginning of our century

One September morning in 2008, an investment banker approaching forty, his career in collapse and his marriage unraveling, receives a surprise visitor at his West London townhouse. In the disheveled figure of a South Asian male carrying a backpack, the banker recognizes a long-lost friend, a mathematics prodigy who disappeared years earlier under mysterious circumstances. The friend has resurfaced to make a confession of unsettling power.
"In the Light of What We Know" takes us on a journey of exhilarating scope--from Kabul to London, New York, Islamabad, Oxford, and Princeton--and explores the great questions of love, belonging, science, and war. It is an age-old story: the friendship of two men and the betrayal of one by the other. The visitor, a man desperate to climb clear of his wrong beginnings, seeks atonement; and the narrator sets out to tell his friend's story but finds himself at the limits of what he can know about the world--and, ultimately, himself. Set against the breaking of nations and beneath the clouds of economic crisis, this surprisingly tender novel chronicles the lives of people carrying unshakable legacies of class and culture as they struggle to tame their futures.
In an extraordinary feat of imagination, Zia Haider Rahman has telescoped the great upheavals of our young century into a novel of rare intimacy and power.

Born in rural Bangladesh, Zia Haider Rahman was educated at Balliol College, Oxford, and at Cambridge, Munich, and Yale Universities. He has worked as an investment banker on Wall Street and as an international human rights lawyer. "In the Light of What We Know" is his first novel.

Praise for In the Light of What We Know

"[A] strange and brilliant novel . . . I was surprised it didn't explode in my hands." —Amitava Kumar, The New York Times Book Review

"Beautifully written and renewed evidence that some of the most interesting writing in English is coming from the edges of old empires." —Kirkus (starred review)

“[Rahman’s] fascination with mathematics and the universe of ideas is contagious, and enriches the complex narrative about how we know the reality around us… [T]his ambitious debut novel has considerable depth and scope.” – Library Journal (starred review)

"This formidable and compelling novel offers the reader pleasures not often found in the same venue. Its boldness in engaging elements of our contemporary crisis is bracing. In presenting his cast of characters, Rahman supplies close readings of class, mores, and manners that are extraordinary. And throughout, he sustains an almost subliminal resonance with the conventions, strengths, and tone of certain classic social novels in the English canon—Conrad’s in particular. This is a debut to celebrate." —Norman Rush, author of Mating and Subtle Bodies

"Here it is, the vast and brilliant debut novel of our time for which readers have been waiting. Set against the backdrop of economic crises and the war in Afghanistan, Zia Haider Rahman’s novel about a troubled friendship between two men—one born in the United States to well-placed parents from Pakistan, and the other born in Bangladesh—is deeply penetrating and profoundly intimate, as if made by a muralist whose heart belongs to the details. In the Light of What We Know is a novel of startling vision, written in a prose that’s as strong and bold as it is impeccable. Who’s the true heir to such greats as George Orwell and V.S. Naipaul? It’s Zia Haider Rahman." —Richard McCann, author of Mother of Sorrows

"Brilliant and heartbreaking, In the Light of What We Know is the first truly great book of the new century." —Ceridwen Dovey, author of Blood Kin