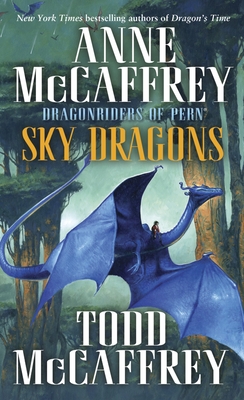 This is book number 24 in the Pern series.

Scores of dragons are dead after plague swept across the world of Pern, and now the Weyrs are struggling to rebuild before Threadfall destroys everything—and everyone—left alive. Their best hope lies with a group of new dragonriders who have volunteered to brave the dangers of an unexplored island populated by vicious wild felines and voracious tunnel-snakes to create a safe home for their young dragons, whose offspring will hopefully replenish Pern’s decimated population. But their leader, Xhinna, the first female rider of a blue dragon, faces an uphill battle to win the respect of her peers, especially after tragedy leaves the new colony reeling. The way forward seems to lie with the awesome ability of the dragons to travel through time. But that power comes with risks: By venturing into the past, Xhinna may jeopardize the very future she has sworn to save.

“Memorable characters and a good balance of individual dramas and large-scale action make this a strong addition to the Pern saga.”—Library Journal

“Longtime fans will enjoy the latest adventures of the cheerful dragonriders and their colorful mounts.”—Publishers Weekly

“McCaffrey will be remembered, rightly, as one of science fiction’s grand masters.”—Tordotcom

Anne McCaffrey, one of the world’s most popular authors, is best known for her Dragonriders of Pern® series. She was the first woman to win the top two prizes for science fiction writing, the Hugo and the Nebula awards. She was also given the American Library Association’s Margaret A. Edwards Award for Lifetime Literary Achievement in Young Adult Fiction, was inducted into the Science Fiction Hall of Fame, and was named a Science Fiction Writers of America Nebula Grand Master. Born in Cambridge, Massachusetts, in 1926, McCaffrey relocated to Ireland in the 1970s, where she lived in a house of her own design, named Dragonhold-Underhill. She died in 2011.

Todd McCaffrey is the bestselling author of the Pern novels Dragonsblood, Dragonheart, and Dragongirl, and the co-author, with his mother, Anne McCaffrey, of Dragon’s Time, Dragon’s Kin, Dragon’s Fire, and Dragon Harper. A computer engineer, he currently lives in Los Angeles. Having grown up in Ireland with the epic of the Dragonriders of Pern,® he is bursting with ideas for new stories of that world, its people, and its dragons.

“Captivating . . . The McCaffreys are well known for their brilliant characterizations, and they do not disappoint here.”—Booklist