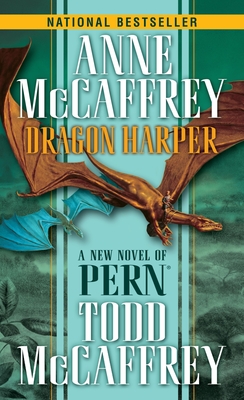 This is book number 20 in the Pern series.

NATIONAL BESTSELLER • “Captivating . . . The McCaffreys are well known for their brilliant characterizations, and they do not disappoint here.”—Booklist

In Fort Hold, a clutch of fire-lizard eggs is about to hatch, and Lord Bemin’s beautiful young daughter, Koriana, is determined to Impress one of the delightful creatures. At the hatching, apprentice harper Kindan Impresses a fire-lizard of his own . . . and wins the heart of Koriana. But Lord Bemin mistrusts harpers and will not hear of a match between his daughter and the low-born Kindan. Then fate intervenes in the form of a virulent plague as fast-spreading as it is deadly. Arising suddenly, as if out of nowhere, the contagion decimates hold after hold, paying no heed to distinctions of birth. In this feverish crucible, friendship and love will be tested to the breaking point and beyond. For with Threadfall scant years away, the Dragonriders dare not expose themselves to infection, and it will fall to Kindan and his fellow apprentices to bravely search for a cure and save humanity.

“Strong storytelling and compelling drama, along with memorable characters.”—Library Journal

Todd McCaffrey is the bestselling author of the Pern novel Dragonsblood, as well as Dragon’s Kin and Dragon’s Fire, which he co-wrote with his mother, Anne McCaffrey. A computer engineer, he currently lives in Los Angeles. Having grown up in Ireland with the epic of the Dragonriders of Pern, he is bursting with ideas for new stories of that world, its people, and its dragons.

“Grittier than the early parts of the series; Todd’s apparently brought a wider, more current worldview to Pern.”
–The San Diego Union-Tribune

“A guaranteed pleaser [in] one of SF’s most splendid and longest-lived sagas.”
–Booklist