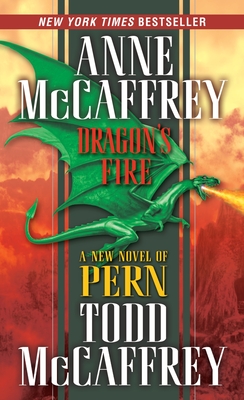 This is book number 19 in the Pern series.

NEW YORK TIMES BESTSELLER • “A richly detailed story on a par with the rest of the Pern canon . . . another successful McCaffrey mother-and-son collaboration.”—Booklist

At Natalon’s mining camp, Pellar embarks on a secret mission to discover whether the condemned criminals known as the Shunned are stealing coal. But the gifted tracker discovers that a far more treacherous plot is unfolding. A heartless thief named Tenim has realized there is profit to be made from firestone, the volatile mineral that enables the dragons of Pern to burn the lethal Thread out of the sky. When the last remaining firestone mine explodes, a desperate race begins to find a new deposit of the deadly but essential mineral. Sure enough, Tenim has a murderous plan to turn tragedy to his own advantage. Now Pellar and his new friends—the kind and gentle Halla, a child of the Shunned, and Cristov, the son of a corrupt miner—must stop Tenim. If they fail, it will mean the end for Pern and its dragonriders.

Todd McCaffrey is the bestselling author of the Pern novel Dragonsblood, as well as Dragon’s Kin, which he co-wrote with his mother, Anne McCaffrey. A computer engineer, he currently lives in Los Angeles. Having grown up in Ireland with the epic of the Dragonriders of Pern, he is bursting with ideas for new stories of that world, its people, and its dragons.

Praise for Dragon’s Kin by Anne McCaffrey and Todd McCaffrey

“A guaranteed pleaser [in] one of sf’s most splendid and longest-lived sagas.”
–Booklist

Praise for Dragonsblood by Todd McCaffrey

“Todd McCaffrey does something I didn’t think anyone could do: he writes Anne McCaffrey’s Pern. . . . May the saga continue!”
–David Weber, author of The Shadow of Saganami

“The torch has been passed and burns more brightly than ever. . . . [Dragonsblood] fits beautifully into the existing history and style of earlier books while still breaking new ground.”
–Publishers Weekly