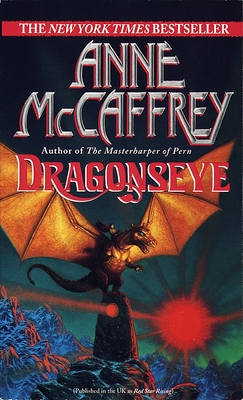 This is book number 14 in the Pern series.

In Anne McCaffrey’s New York Times bestselling Dragonseye, join Weyrleaders, Holders, and Craftmasters in the creation of the legendary Star Stones and the teaching ballads of Pern!

It's been two hundred years since the deadly Thread fell like rain upon Pern, devouring everything in its path. No one alive remembers that first horrific onslaught and no one believes in its return—except for the dragonriders. For two centuries they have been practicing and training, passing down from generation to generation the formidable Threadfighting techniques.

Now the ominous signs are appearing: the violent winter storms and volcanic eruptions that are said to herald the approach of the Red Star and its lethal spawn. But one stubborn Lord Holder, Chalkin of Bitra, refuses to believe--and that disbelief could spell disaster. So as the dragonriders desperately train to face a terrifying enemy, they and the other Lord Holders must find a way to deal with Chalkin—before history repeats itself and unleashes its virulence on all of Pern. . . .