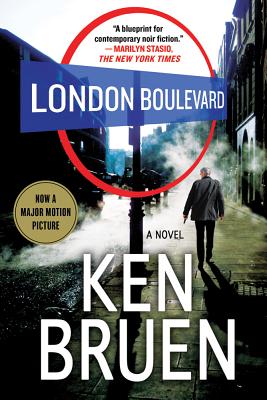 When Mitchell is released from prison after serving three years for a vicious attack he doesn't even remember, Billy Norton is there to pick him up. But Norton works for Tommy Logan, a ruthless loan shark lowlife with plans Mitchell wants nothing to do with. Attempting to stay out of Logan's way, he finds work at the Holland Park mansion of faded movie actress Lillian Palmer, where he has to deal with her mysterious butler, Jordan. It isn't long before Mitchell's violent past catches up with him and people start getting hurt. When his disturbed sister Briony is threatened, Mitchell is forced to act.

London Boulevard is a masterful work of double-dealing and suspense from Ken Bruen, one of the great crime writers of our time.

Ken Bruen has been a finalist for the Edgar and Anthony Awards, and has won a Macavity Award, a Barry Award, and two Shamus Awards for the Jack Taylor series. He is also the author of the Inspector Brant series. Several of Bruen's novels have been adapted for the screen: The first six Jack Taylor novels were adapted into a television series starring Iain Glen; Blitz was adapted into a movie starring Jason Statham; and London Boulevard was adapted into a film starring Colin Farrell and Keira Knightley. Bruen lives in Galway, Ireland.

“Even tough guys are allowed to play their little games, and Ken Bruen exercises that license in London Boulevard, an unnervingly clever reworking of ‘Sunset Boulevard' that's both a homage to the 1950 Billy Wilder film and a blueprint for contemporary noir fiction.” —Marilyn Stasio, The New York Times

“This is a strong solo effort from Irish noir master Bruen, whose prose floats like a butterfly and stings like bejesus.” —Library Journal

“Bruen combines staccato prose and hard-edged dialogue with gritty realism and a terrifying look at London's dark underbelly. This one packs one hell of a powerful punch.” —Booklist (starred review)

“Bruen is a master of dark crime fiction and London Boulevard further seals his affinity for the noir.” —The South Florida Sun-Sentinel