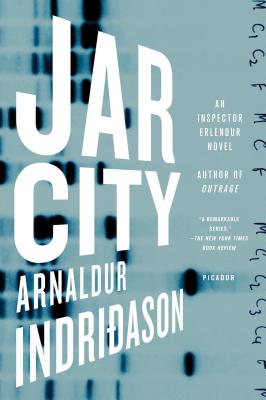 This is book number 1 in the An Inspector Erlendur Series series.

“Do you love Henning Mankell's Kurt Wallander Swedish mystery series or Ian Rankin's dark tales set in Edinburgh? Then it's time for you to meet Icelandic author Indridason and his sharp, enigmatic, and melancholy Detective Erlendur. Jar City gets my highest recommendation.”
— Laura Hansen, Bookin' It, Little Falls, MN

When a lonely old man is found dead in his Reykjavík flat, the only clues are a cryptic note left by the killer and a photograph of a young girl's grave. Inspector Erlendur discovers that many years ago the victim was accused, but not convicted, of an unsolved crime, a rape. Did the old man's past come back to haunt him? As Erlendur reopens this very cold case, he follows a trail of unusual forensic evidence, uncovering secrets that are much larger than the murder of one old man.

“Fan[s] of mystery in general and Henning Mankell and Karin Fossum can only exult.” —Library Journal

“This is a dark, haunting novel, with a protagonist who searches for a murderer and finds his own humanity. The emotionally wrought ending caught me off guard and touched me in a way that few mystery novels do.” —The Boston Globe

“Jar City stresses both the otherworldliness of this faraway country and how similar its denizens are to the rest of us. . . . An excellent debut.” —Baltimore Sun

“Indridason raises in a thoroughly gripping manner not just questions of paternity in a small nation, but wider issues of the use of genetic information, culminating in an ending that proves impressively moving.” —Time Out London

“Jar City is classic mystery fiction, both compassionate and thrilling. Indridason is about to become one of the brightest stars in the genre's dark skies.” —John Connolly, author of Dark Hollow

“There's much to glean about the people of Iceland from this erudite and compelling story. . . . Jar City taps into the melancholy of Scandinavian perspective and manages to be quite thrilling, too.” —Rocky Mountain News

“This careful, sparsely written book operates at a deeper level than most crime fiction: it conveys the sense of painful inevitability underlying the old stories that medieval Icelanders told through the long winter nights.” —The Independent (London)

“The descriptions of Reykjavík and the surrounding area . . . are fascinating in their own right, and the plotting is riveting. . . . Detective Inspector Erlendur Sveinsson is an intense and introspective protagonist.” —BookPage

“The author's American debut, winner of the 2002 Nordic Crime Novel Award, is a model puzzle presented with clarity and crisp economy.” —Kirkus Reviews

“An absorbing police procedural dense with psychological pressure. The plot is a twister, the setting unique, and Erlendur's personal life is even bleaker than the Icelandic fall. Erlendur is a cop to watch. And I will.” —Marshall Browne, author of The Eye of the Abyss