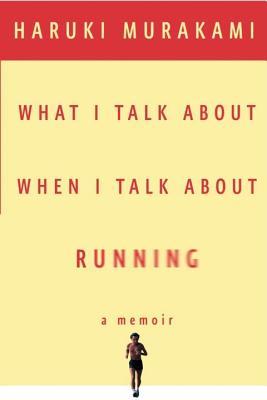 “Focus. Endurance. Will. Murakami argues that these traits are at least as important as talent in both running and writing--probably even more important. Whether you're a writer or a runner (or both), or just somebody who wants an entertaining read, you'll find a lot to love in this marvelous book.”
— Dave Mallmann, Harry W. Schwartz Bookshop, Brookfield, WI

“Focus. Endurance. Will. Murakami argues that these traits are at least as important as talent in both running and writing -- probably even more important. Whether you're a writer or a runner (or both), or just someone who wants an entertaining read, you'll find a lot to love in this marvelous book.”
— Dave Mallmann, Harry W. Schwartz Bookshop, Brookfield, WI

In 1982, having sold his jazz bar to devote himself to writing, Murakami began running to keep fit. A year later, he’d completed a solo course from Athens to Marathon, and now, after dozens of such races, not to mention triathlons and a dozen critically acclaimed books, he reflects upon the influence the sport has had on his life and—even more important—on his writing.

Equal parts training log, travelogue, and reminiscence, this revealing memoir covers his four-month preparation for the 2005 New York City Marathon and takes us to places ranging from Tokyo’s Jingu Gaien gardens, where he once shared the course with an Olympian, to the Charles River in Boston among young women who outpace him. Through this marvelous lens of sport emerges a panorama of memories and insights: the eureka moment when he decided to become a writer, his greatest triumphs and disappointments, his passion for vintage LPs, and the experience, after fifty, of seeing his race times improve and then fall back.

By turns funny and sobering, playful and philosophical, What I Talk About When I Talk About Running is rich and revelatory, both for fans of this masterful yet guardedly private writer and for the exploding population of athletes who find similar satisfaction in running.

Haruki Murakami was born in Kyoto in 1949 and now lives near Tokyo. His work has been translated into forty-two languages. The most recent of his many honors is the Franz Kafka Prize.

"[What I Talk About When I Talk About Running is] a graceful explanation of Mr. Murakami's intertwining obsessions, conveyed with his characteristic ability to draw unexpected connections. Running may be a matter of placing one foot in front of the other on the ground, but, as is so often the case with Mr. Murakami, terrestrial objects have a tendency to take flight." –Chloë Schama, New York Sun

"Murakami constructs this piecemeal narrative with the same masterful, accessible prose marked by humor and streaks of magic which has made him a household name, the same staggering insights, the same fascinating connections...this is exactly what makes Murakami so special: his ability to render everything a part of everything else, and to end with monumental poignancy...In an extremely personal, candid and moving way, the book makes one want to read and run at the same time." –Reynard Seifert, Austin Fit Magazine

"[Murakami's] descriptive eye is as acute as ever...Fascinating...A glimpse into the creative process of one of the world's great writers." –Dan Pope, The Hartford Courant

"Enthralling...Throughout this quirky, brilliant gem, Murakami's life lessons unfold with plainspoken power that should prove valuable to a broad readership–even those who have no ambitions to write elaborate novels or run grueling races." –Hank Shteamer, Time Out New York

"A felicitous, casual series of reflections and anecdotes...[Murakami] has a Warholian way of tinting the mundane with mystery and restrained humor...Do still waters run deep? This paean to a runner's life keeps us, pleasurably, wondering." –Joel Rice, The Tennessean

"In What I Talk About When I Talk About Running, [Murakami] has turned something seemingly mundane–his running journals–into a brilliant meditation on how his running and writing nurture and sustain each other...With spare, engaging prose...Murakami shares his runner's high." –Farrell Evans, Sports Illustrated

"[What I Talk About When I Talk About Running] provides a fascinating portrait of Murakami's working mind and how he works his magic on the page...[a] charming, sober little book." –John Freeman, Newark Star-Ledger

"Highly recommended...Practical philosophy from a man whose insight into his own character, and how running both suits and shapes that character, is revelatory and can provide tools for readers to examine and improve their own lives." –Library Journal

“If we all ran like brilliant Japanese novelist Murakami, would we write as well as he does?” —Library Journal