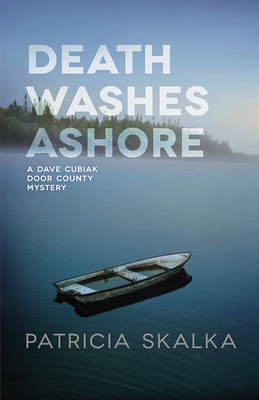 In the wake of a brutal storm that lashed the Door County peninsula, Sheriff Dave Cubiak assesses the damage: broken windows, downed trees, and piles of mysterious debris along the shoreline. He leaves the comfort of his home and heads out into the aftermath, checking in with folks along the way to offer help. His assistant, marooned at the justice center overnight, calls with an ominous message about a body discovered on the beach. When the medical examiner discovers the man didn’t simply drown during the storm, Cubiak searches for answers.

Chasing leads, the sheriff learns the victim directed a troupe of live-action role players living in an ersatz Camelot. In a setting where pretense in the norm, Cubiak must determine if suspects are who they say they are or if their made-up identities conceal a ruthless killer. As tensions escalate among neighbors unhappy about the noise and commotion, the sheriff discovers that more than one person on the peninsula has a motive for murder.

Patricia Skalka is the author of Death Stalks Door County, Death at Gills Rock, Death in Cold Water, Death Rides the Ferry, and Death by the Bay, the first five books in the popular Dave Cubiak Door County Mystery series. She divides her time between Milwaukee and Door County, Wisconsin.

“Dave Cubiak, the taciturn, grieving, relentless sheriff of Door County and irresistible protagonist, has a problem. Patricia Skalka’s rendering of Cubiak and all the colorful characters in Death Washes Ashore is compelling and empathetic, written in simple, elegant language and revealing dialogue. Read it now.”—Bryan Gruley, author of Purgatory Bay

“Death Washes Ashore is a nice mix of traditional mystery and police procedural, set in a fascinating corner of the Midwest, with three-dimensional characters and a good feel for the life of a community. Patricia Skalka knows the Door County tourists don’t see.”—Sam Reaves, author of Cold Black Earth

“Weaving clues throughout the strange world of live action role play, this book plumbs depths as great as the lake waters surrounding the peninsula: the insider/outsider war in the county, the bitter, bottomless pain of losing a child, and how Cubiak struggles to restore justice despite these forces. A great read for the thinking mystery lover.”—Jenny Milchman, Mary Higgins Clark award-winning author of Cover of Snow