The Knife: A Novel (Paperback) 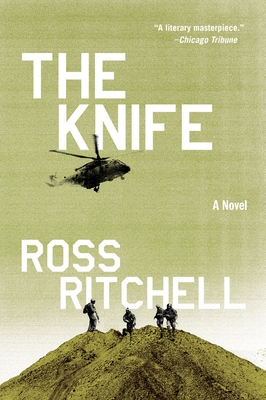 It’s hot and getting hotter this summer in Afghanipakiraqistan—the preferred name for the ambiguous stretch of the world where the U.S. Special Forces operate with little outside attention. Team Leader Dutch Shaw is missing his late grandmother. She was the last link he had to civilian life, to any kind of world of innocence.

But there’s no time to mourn. After two helicopters in a sister squadron are shot down, Shaw and his team know that they’re going to be spun up and sent back in, deep into insurgent territory, where a mysterious new organization called Al Ayeelaa has been attracting high-value targets from across the region. As Shaw and his men fight their way closer to the source, mission by mission, they begin to realize that their way may have been prepared for them in advance, and not by a welcoming host.

The Knife is a debut novel of intense authenticity by a former soldier in a United States Special Operations Command direct-action team. As scenes of horseshoes and horseplay cut to dim Ambien-soaked trips in helicopters and beyond, Ritchell’s story takes us deep beneath the testosterone-laced patter into the lonelier, more ambivalent world of military life in the Middle East. The result is a fast-paced journey into darkness; a quintessential novel of the American wars of the twenty-first century.

Ross Ritchell is a former soldier in a United States Special Operations Command direct-action team conducting classified operations in the Middle East. Upon his discharge, he enrolled at Northwestern University, where he earned an MFA. He lives with his family in Illinois.

“The National Book Award went to Phil Klay, a writer who used his experiences as a veteran in his fiction…but now a new writer, also a veteran, is giving Klay a run for his money...Ross Ritchell’s THE KNIFE..reminiscent of Tim O’Brien’s Vietnam novel, The Things They Carried…. it’s the best novel yet about life at the point of the knife, in these times of overlapping foreign wars.”
--Alan Cheuse, National Public Radio's "All Things Considered"

“In 2014, the short stories in Phil Klay’s ‘Redeployment’ were heralded as some of the most authentic wartime writing in our ever-changing post-9/11 world. In 2015, ‘The Knife,’ another literary masterpiece, deserves the same praise for its portrayal of valor and the horrors of war...Ritchell, a former soldier who participated in classified special operations missions in the Middle East and now lives in Evanston, uses personal experience to write a novel that paints war as a complicated, exhausting, gut-wrenching ordeal. It gives Ritchell’s story a richly personal and organic sensibility.” –Chicago Tribune

"Ritchell, a former special operations soldier, explores both the macho swagger of these hardened soldiers and their more introspective moments in an almost journal-like manner...while not short of action scenes, the novel is at its best when it probes the soldiers’ misgivings about the job they’re asked to do and the fine line between killing enemy combatants and murder that can exist in a battle zone where civilians and soldiers are intermingled. A simultaneously tough and thoughtful work." —Library Journal

"Raw, authentic and deeply moving, this is a stunning debut."—Rene Denfeld, author of The Enchanted

"The most gripping and thought-provoking novel I've read this year, The Knife will enchant, move, and haunt its readers. Ross Ritchell's gritty prose is stunning, and his painfully human characters linger in the mind. The Knife is a powerful meditation on war and man, told by a remarkably gifted novelist."— Michael Koryta, New York Times bestselling author

Former Army Ranger and combat veteran Ritchell delivers a war story about the mind-numbing periods of waiting, the stress of battle fatigue, the ingeniously idiotic ideas that fill downtime and the spine-tingling moments when life is ever so fragile...Ritchell describes night operations, "snatch and grab"s and the elimination of HVTs (High Value Targets) without false bravado, while still broadcasting the immense skill possessed by these soldiers. He draws the high drama and moral complexity of the Rangers' life on the front lines from a place of narrative distance, allowing the reader to fill in the unstated emotions of Shaw and his team, giving their story great poignancy. A beautiful book about the soldiers who sit on the front lines of the U.S. military machine. —Kirkus

"Ross Ritchell has written a compellingly authentic debut novel.  It’s uniquely haunting effect arises in part from a dissonance between the clarity of both its action and the immediacy of its telegraphic prose, and yet, at the same time there’s a convincing sense of disassociation, a shadow of shocked, repressed emotion."—Stuart Dybek, author of The Coast of Chicago

The Knife is intimate immersion in a squad of soldiers in a war zone. It is funny, disgusting, warm and terrifying, by turns or all at once. It is beautiful. Honest. Heart breaking.
—Katherine Dunn, author of Geek Love