Thoughts and Sentiments on the Evil of Slavery (Paperback) 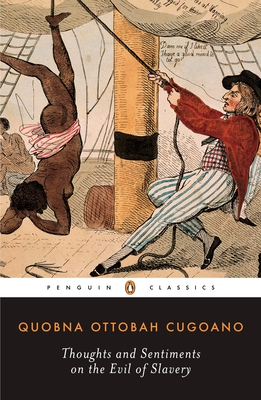 A freed slave's daring assertion of the evils of slavery

Born in present-day Ghana, Quobna Ottobah Cugoano was kidnapped at the age of thirteen and sold into slavery by his fellow Africans in 1770; he worked in the brutal plantation chain gangs of the West Indies before being freed in England. His Thoughts and Sentiments on the Evil of Slavery is the most direct criticism of slavery by a writer of African descent. Cugoano refutes pro-slavery arguments of the day, including slavery's supposed divine sanction; the belief that Africans gladly sold their own families into slavery; that Africans were especially suited to its rigors; and that West Indian slaves led better lives than European serfs. Exploiting his dual identity as both an African and a British citizen, Cugoano daringly asserted that all those under slavery's yoke had a moral obligation to rebel, while at the same time he appealed to white England's better self.

Quobna Ottobah Cugoano was born in present-day Ghana. Kidnapped at the age of thirteen and sold into slavery by his fellow Africans in 1770, he worked in the brutal plantation chain gangs of the West Indies before being freed in England.

Vincent Carretta is professor of English at the University of Maryland, College Park. He is the editor of the Penguin Classics editions of the Complete Writings of Phillis Wheatley, Letters of the Late Ignatius Sancho, an African, and Thoughts and Sentiments on the Evil of Slavery by Ottobah Cugoano.

"Vincent Carretta singlehandedly has transformed our understanding of the origins of the Anglo-African literary tradition. He has breathed new life into texts long thought dead" —Henry Louis Gates, Jr.