Welcome to Dunder Mifflin: The Ultimate Oral History of The Office (Hardcover) 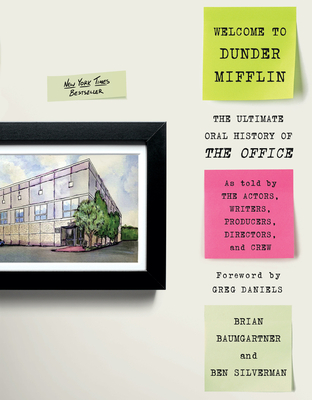 “The definitive history of the landmark TV show.” —USA Today

Join the entire Dunder Mifflin gang on a journey back to Scranton: here's the hilarious and improbable inside story behind the beloved series.

Based on hundreds of hours of exclusive interviews with the cast and creators and illustrated with 100 behind-the-scenes photographs, here, at last, is the untold inside story of The Office, featuring a foreword by Greg Daniels, who adapted the series for the U.S. and was its guiding creative force, and narrated by star Brian Baumgartner (aka “Kevin Malone”) and executive producer Ben Silverman..

In Welcome to Dunder Mifflin, the entire Office gang reunite after nearly a decade to share their favorite untold stories, spill secrets, and reveal how a little show that barely survived its first season became the most watched series in the universe. This ultimate fan companion pulls back the curtain as never before on all the absurdity, genius, love, passion, and dumb luck that went into creating America's beloved The Office.

Ben Silverman, the Emmy and Golden Globe Award–winning producer behind The Office, is the chairman of Propagate Content. Silverman executive produced The Office, Ugly Betty, Biggest Loser, Jane the Virgin, and The Tudors, among others.

Greg Daniels is the Emmy-winning TV writer, director, and producer who developed The Office for NBC and was the original showrunner.

“Dazzling. … Will delight any reader. … Fans of The Office will enjoy Welcome to Dunder Mifflin.” — New York Times Book Review, "Best Books to Give This Season"

“This definitive oral history…is as sharp and well crafted as the comedy that inspired it. … A true insider’s guide filled with sweet surprises for fans and the brainy charm to make new ones.” — Kirkus Reviews (starred review)

“A must for fans of The Office. With a foreword by Greg Daniels and interviews with cast members, behind-the-scenes photos and more, it’ll put you right back in Scranton, Pennsylvania.” — CNN.com

“The definitive history of The Office. … Spills all of the tea on NBC's iconic sitcom. … The perfect gift for your cousin who is currently on their fifth rewatch.”  — E! Online, Top Books to Read This Month

"Any Office stan worth their salt needs a copy." — Bon Appétit

“The definitive history of the landmark TV show, based on hundreds of hours of interviews with the cast and creators who share their favorite stories and untold secrets, complete with behind-the-scenes photographs.” — USA Today

“Provides a behind-the-scenes look at the history of the beloved show.” — People

"A pretty package, large and wide, full of production art; it’s solace that a sitcom about a paper company generated a warm printed artifact on nice paper. Like the show itself, there are also recollections here so tender, I felt myself tearing up, and rejected plots so ridiculous, I convulsed with belly laughs. Of these TV oral histories, it’s also the smartest on how actual creative choices play out." — Chicago Tribune