To Die but Once: A Maisie Dobbs Novel (Large Print / Paperback) 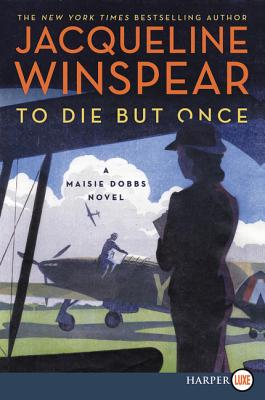 Maisie Dobbs—“one of the most complex and admirable characters in contemporary fiction” (Richmond Times-Dispatch)—faces danger and intrigue on the homefront during World War II.

Spring 1940. During the months following Britain’s declaration of war on Germany, Maisie Dobbs investigates the disappear-ance of a young apprentice working on a hush-hush government contract. As news of the plight of thousands of soldiers stranded on the beaches of France is gradually revealed to the general public, and the threat of invasion rises, another young man beloved by Maisie makes a terrible decision that will change his life forever.

Maisie’s investigation leads her from the countryside of rural Hampshire to the web of wartime opportunism exploited by one of the London underworld’s most powerful men, in a case that serves as a reminder of the inextricable link between money and war. Yet when a final confrontation approaches, she must acknowledge the potential cost to her future—and the risk of destroying a dream she wants very much to become reality.

Jacqueline Winspear is the author of the New York Times bestsellers The Consequences of Fear, The American Agent, To Die but Once, In This Grave Hour, Journey to Munich, A Dangerous Place, Leaving Everything Most Loved, and Elegy for Eddie, as well as eight other bestselling Maisie Dobbs novels. Her standalone novel, The Care and Management of Lies, was also a New York Times bestseller, and a finalist for the Dayton Literary Peace Prize. Winspear has won numerous prizes, including the Agatha, Alex, and Macavity awards for the first book in the series, Maisie Dobbs, which was also nominated for the Edgar Award for Best Novel and was named a New York Times Notable Book. Originally from the United Kingdom, she lives in California.

“The wartime details ... transport us with ease to a milieu where danger is omnipresent but—thanks to the presence of steadfast figures like Dobbs and her like-spirited colleagues—so is hope.”
— Wall Street Journal

“Maisie Dobbs is always looking for truth and the underlying motives in her cases. Her stories are ones that this reviewer always wants to read because of her character, values and thoughts on life.... A story about WWII and England that is close to the heart.”
— Bookreporter.com

“A novel that appeals equally to the intellect and the emotions, To Die but Once advances Maisie’s engaging story and reaffirms Winspear’s eminence in her field.... [A] radiant series.”
— Richmond Times-Dispatch

“History comes alive when a character you think of as a friend is in the thick of the action. That’s how Jacqueline Winspear keeps her Maisie Dobbs series so fresh.”
— New York Times Book Review

“The novelist paints a fascinating picture of life in England at the dawn of war.... Resourceful Maisie remains an endearingly complex character.”
— Minneapolis Star Tribune

“Winspear has created another rich reading experience for Maisie’s many fans, but this title could be seen as entry point for new fans as well. Highly recommended for readers who enjoy a thoughtful mystery.”
— Library Journal, starred review

“In addition to providing a very good mystery, Winspear does a smashing job describing the bravery exhibited by everyday Britons as the fear of invasion becomes ever more real.”
— Kirkus