Doctor Who: Now We Are Six Hundred: A Collection of Time Lord Verse (Hardcover) 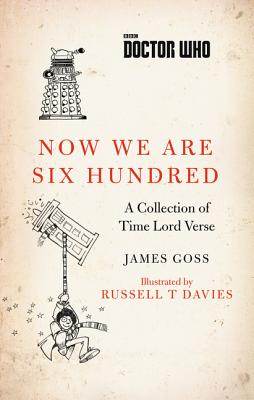 With illustrations by Russell T Davies, original showrunner of the new-era Doctor Who, the first ever Doctor Who poetry collection—a charming, funny and whimsical illustrated collection of verse that celebrates the joys and pitfalls of getting older . . . Time-Lord older.

Like many of us, the older they get, the more Time Lords realize how little they understand the universe around them. This delightful collection of poems—the first volume of Doctor Who verse published—offers moments of insight, wit, and reassurance for the maturing inhabitants of Gallifrey (and everywhere else), including such delights as:

When I was One

I was not much fun

When I was Two

I was barely through

When I was Three

When I was Four

I hated a bore

When I was Five

I was really alive

When I was Six

I somehow could never quite fit in to what was expected of me, well, not exactly but that was because things weren’t neat and there are no easy rhymes in the universe and scansion, my dear Peri, is a thing that’s really overrated and you only have to look at a sunset to realise that creation itself is a poem and oh no wait, got it, of course, Fix! The line needed to end with Fix!

(Or tricks. That’s works too.)

When I was Seven

I sent the gods to Heaven

When I was Eight

When I was Nine

I had forgotten time

When I was Ten

When I was Eleven

I totally got even

When I was Twelve, I became as clever as clever

(*Unless, of course, there is a terrible catastrophe involving explosions, radiation, or heights. And then I guess we’ll find out what comes next. But the eyebrows won’t be as good.)

James Goss has written three Torchwood novels, a Doctor Who novel, and two radio plays, and is the co-author, with Steve Tribe of The Dalek Handbook and Doctor Who: A History of the Universe in 100 Objects. His Doctor Who audiobook Dead Air won Best Audiobook 2010 and his books Dead of Winter and First Born were both nominated for the 2012 British Fantasy Society Awards.

JAMES GOSS has adapted three Doctor Who stories by Douglas Adams for BBC Books (City of Death, The Pirate Planet, and The Krikkitmen). He’s also written several original Doctor Who and Torchwood books. His novel #Haterz is in development as a motion picture. He’s also written for the stage and the radio. This is his first (and probably only) volume of poetry.

Russell T Davies is one of the UK’s foremost writers of television drama. He was Head Writer and Executive Producer of Doctor Who when it returned in 2005 and has written many of the new series’ most memorable episodes. He was awarded an OBE in 2008 for services to drama.