The Nine of Us: Growing Up Kennedy (Hardcover) 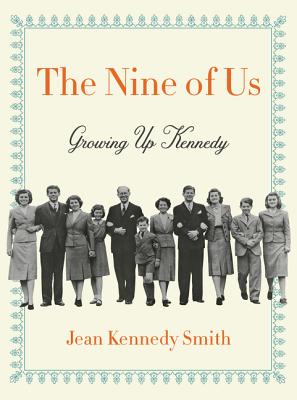 In this evocative and affectionate memoir, Ambassador Jean Kennedy Smith, the last surviving child of Joe and Rose Kennedy, offers an intimate and illuminating look at a time long ago when she and her siblings, guided by their parents, laughed and learned a great deal under one roof.

Prompted by interesting tidbits in the newspaper, Rose and Joe Kennedy would pose questions to their nine children at the dinner table. "Where could Amelia Earhart have gone?" "How would you address this horrible drought?" "What would you do about the troop movements in Europe?" It was a nightly custom that helped shape the Kennedys into who they would become.

Before Joe and Rose’s children emerged as leaders on the world stage, they were a loving circle of brothers and sisters who played football, swam, read, and pursued their interests. They were children inspired by parents who instilled in them a strong work ethic, deep love of country, and intense appreciation for the sacrifices their ancestors made to come to America. "No whining in this house!" was their father’s regular refrain. It was his way of reminding them not to complain, to be grateful for what they had, and to give back.

In her remarkable memoir, Kennedy Smith—the last surviving sibling—revisits this singular time in their lives. Filled with fascinating anecdotes and vignettes, and illustrated with dozens of family pictures, The Nine of Us vividly depicts this large, close-knit family during a different time in American history. Kennedy Smith offers indelible, elegantly rendered portraits of her larger-than-life siblings and her parents. "They knew how to cure our hurts, bind our wounds, listen to our woes, and help us enjoy life," she writes. "We were lucky children indeed."

Jean Kennedy Smith  is the former United States Ambassador to Ireland and founder of VSA, an international organization that provides arts and education opportunities for people with disabilities and increases access to the arts for all. Smith was named an honorary citizen of Ireland by Irish President Mary McAleese for her contribution to the Irish peace process, and was awarded the Presidential Medal of Freedom by President Barack Obama in recognition of her service to people with disabilities. The eighth of nine children born to Rose Fitzgerald Kennedy and Joseph P. Kennedy Sr., Smith is a mother of four and the widow of the late Stephen Smith. She lives in New York.

“Rhis book, filled with childhood photos and reminiscences, is an engaging look at a large, close-knit family in the 1930s and '40s, albeit one more privileged than most. No doubt some of these anecdotes have been told before, but hearing them from the last surviving Kennedy sibling gives them an added poignancy.”
— Providence Journal

“There are useful lessons here, not just for grandchildren but for Americans as a whole, especially those who might wonder how the Kennedys so captured the popular imagination.”
— Chicago Tribune