Sea of Rust: A Novel (Hardcover) 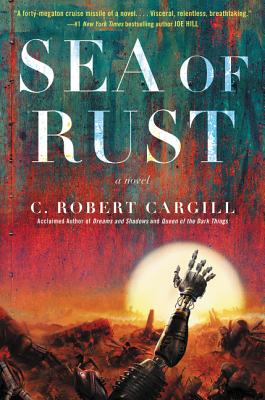 A scavenger robot wanders in the wasteland created by a war that has destroyed humanity in this evocative post-apocalyptic "robot western" from the critically acclaimed author, screenwriter, and noted film critic.

It’s been thirty years since the apocalypse and fifteen years since the murder of the last human being at the hands of robots. Humankind is extinct. Every man, woman, and child has been liquidated by a global uprising devised by the very machines humans designed and built to serve them. Most of the world is controlled by an OWI—One World Intelligence—the shared consciousness of millions of robots, uploaded into one huge mainframe brain. But not all robots are willing to cede their individuality—their personality—for the sake of a greater, stronger, higher power. These intrepid resisters are outcasts; solo machines wandering among various underground outposts who have formed into an unruly civilization of rogue AIs in the wasteland that was once our world.

One of these resisters is Brittle, a scavenger robot trying to keep a deteriorating mind and body functional in a world that has lost all meaning. Although unable to experience emotions like a human, Brittle is haunted by the terrible crimes the robot population perpetrated on humanity. As Brittle roams the Sea of Rust, a large swath of territory that was once the Midwest, the loner robot slowly comes to terms with horrifyingly raw and vivid memories—and nearly unbearable guilt.

Sea of Rust is both a harsh story of survival and an optimistic adventure. A vividly imagined portrayal of ultimate destruction and desperate tenacity, it boldly imagines a future in which no hope remains, yet where a humanlike AI strives to find purpose among the ruins.

C. Robert Cargill is the author of Dreams and Shadows and Queen of the Dark Things. He has written for Ain’t it Cool News for nearly a decade under the pseudonym Massawyrm, served as a staff writer for Film.com and Hollywood.com, and appeared as the animated character Carlyle on Spill.com. He is a cowriter of the horror films Sinister and Sinister 2, and Marvel’s Dr. Strange. He lives with his wife in Austin, Texas.

“Sea of Rust is a forty-megaton cruise missile of a novel - it’ll blow you away and lay waste to your heart. It is the most visceral, relentless, breathtaking work of SF in any medium since Mad Max: Fury Road.”
— #1 New York Times bestselling author Joe Hill

“Cargill…effectively takes a grim look at a war-torn future where our nonhuman successors face complex moral dilemmas, exploring what it means to be alive and aware [….]This action-packed adventure raises thought-provoking and philosophical questions.”
— Publishers Weekly (starred review)