Above the Waterfall: A Novel (Hardcover) 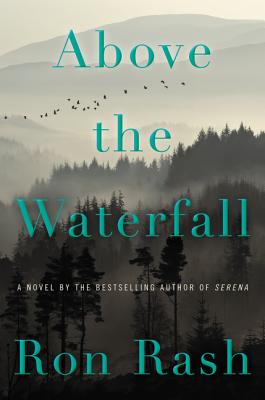 In this poetic and haunting tale set in contemporary Appalachia, New York Times bestselling author Ron Rash illuminates lives shaped by violence and a powerful connection to the land.

Les, a long-time sheriff just three-weeks from retirement, contends with the ravages of crystal meth and his own duplicity in his small Appalachian town.

Becky, a park ranger with a harrowing past, finds solace amid the lyrical beauty of this patch of North Carolina.

Enduring the mistakes and tragedies that have indelibly marked them, they are drawn together by a reverence for the natural world. When an irascible elderly local is accused of poisoning a trout stream, Les and Becky are plunged into deep and dangerous waters, forced to navigate currents of disillusionment and betrayal that will force them to question themselves and test their tentative bond—and threaten to carry them over the edge.

Echoing the heartbreaking beauty of William Faulkner and the spiritual isolation of Carson McCullers, Above the Waterfall demonstrates once again the prodigious talent of “a gorgeous, brutal writer” (Richard Price) hailed as “one of the great American authors at work today” (Janet Maslin, New York Times).

Ron Rash is the author of the 2009 PEN/Faulkner finalist and New York Times bestseller Serena and Above the Waterfall, in addition to four prizewinning novels, including The Cove, One Foot in Eden, Saints at the River, and The World Made Straight; four collections of poems; and six collections of stories, among them Burning Bright, which won the 2010 Frank O’Connor International Short Story Award, and Chemistry and Other Stories, which was a finalist for the 2007 PEN/Faulkner Award. Twice the recipient of the O. Henry Prize, he teaches at Western Carolina University.

“[T]here’s no denying Rash’s grasp of the North Carolina landscape and its reflection in the oft-tortured souls of its denizens, making this novel one of his most successful ventures into poetic humanism.”
— Publishers Weekly

“Combining suspense with acute observations and flashing insights, Rash tells a seductive and disquieting tale about our intrinsic attachment to and disastrous abuse of the land and our betrayal of our best selves.”
— Booklist (starred review)

“Rash, a 2009 PEN/Faulkner Award finalist, is one of our undisputed Appalachian laureates, in company with Robert Morgan, Lee Smith, Fred Chappell, and Mark Powell.”
— The Millions

“Rash is an enormously gifted storyteller... one of the few writers at work today with the insight, the talent and the vision to show us how sometimes, for all our sorry shortcomings, we’re able to achieve a certain redemption through our capacity for kindness and decency.”
— Washington Post

“Rash captures the gritty realities of modern Appalachia with mournful precision...the novel contemplates timeless questions about human frailty, the divinity of nature and the legacies of our native landscapes.”
— Atlanta Journal-Constitution

“[T]hick with atmosphere, lyrical prose, and a visceral sense of place… Rash has crafted the finest prose of his career… another quiet, haunting ode to the natural beauty of the mountains.”
— BookPage

“Ron Rash is one author who gets a lot of recognition regionally but I firmly believe should be regarded as a national treasure.”
— Literary Hub

“Reading Above the Waterfall is like walking a railroad track - the scenery along the way is great, and I’m enjoying the novel’s journey.”
— Charlotte Observer

“Above the Waterfall, with its quiet intensity and natural beauty juxtaposed against human ugliness, is the work of a writer who’s found his way with words.”
— Mountain Xpress

“There’s a harsh reality to Ron Rash’s novels set in the mountains and foothills of the Carolinas. But he writes with a sparseness and grace that belies his beginnings as a poet.”
— Clemson World Magazine

“[S]o well-crafted that it reads like poetry… [Above the] Waterfall will leave the reader pondering the imponderables of life - and grateful, as Rash portrays, in being witness to life’s beauties, even while surrounded by hardship.”
— Jackson Clarion-Ledger

“[Above the Waterfall is] as rich and moving as his best. If you like detective novels, the plot twists are dizzying enough to keep you guessing. Fan or not, you’re going to find this one hard to put down.”
— Charleston Post & Courier

“[A]s beautiful as it is disturbing… In past works, Ron Rash has tried to conjure places for respite, for light, but even his authentic, affecting language hadn’t yet been enough to uncover a permanent crack in the hard rock of his world. Now, maybe, just maybe, he has.”
— Anniston Star

“It was love at first page of Above the Waterfall, the new novel by this lyrical and evocative writer acclaimed for his novels, short stories, and poetry... You might call Rash our Appalachian Shakespeare.”
— Philadelphia Inquirer

“A quick-paced, slender novel that captures the imperfections of how we all are, our weaknesses, our biases, our prejudices, and then, in times of stress and anxiety, if and how we emerge from those troubles with our morals intact.”
— Minneapolis Star Tribune

“ABOVE THE WATERFALL may be [Ron Rash’s] most powerful.”
— Winston-Salem Journal

“[Rash is] a writer who has demonstrated mastery of poetry, short stories, and novels, and one who has brought to the Appalachian region of the Carolinas a defining depth of place and character that has been repeatedly and accurately described as Faulknerian. He’s a writer worth discovering and savoring.”
— PopMatters

“Many have labeled [Rash] a Southern writer or an Appalachian writer, but those terms are deceptive. Rash’s characters are certainly connected to their landscape, but, as with any work that transcends, Rash brings the reader to the universal human concerns inside the particular details.”
— Electric Literature

“Enhanced by Rash’s lyrical prose, this fascination with the land occasionally forces readers to pause and appreciate the beauty of Rash’s language like they would a flower or a sunset.”
— Kansas City Star