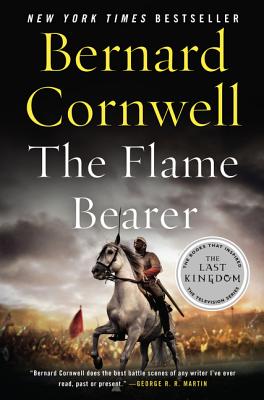 By Bernard Cornwell
$16.99
On Our Shelves Now

This is book number 10 in the Saxon Tales series.

The tenth installment of Bernard Cornwell’s New York Times bestselling series chronicling the epic saga of the making of England, “like Game of Thrones, but real” (The Observer, London)—the basis for The Last Kingdom, the hit television series.

Britain is in a state of uneasy peace. Northumbria’s Viking ruler, Sigtryggr, and Mercia’s Saxon Queen Aethelflaed have agreed a truce. And so England’s greatest warrior, Uhtred of Bebbanburg, at last has the chance to take back the home his traitorous uncle stole from him so many years ago—and which his scheming cousin still occupies.

But fate is inexorable, and the enemies Uhtred has made and the oaths he has sworn conspire to distract him from his dream of recapturing his home. New enemies enter into the fight for England’s kingdoms: the redoubtable Constantin of Scotland seizes an opportunity for conquest and leads his armies south. Britain’s precarious peace threatens to turn into a war of annihilation. Yet Uhtred is determined that nothing—neither the new adversaries nor the old foes who combine against him—will keep him from his birthright.

“Historical novels stand or fall on detail, and Mr. Cornwell writes as if he has been to ninth-century Wessex and back.”
—Wall Street Journal

BERNARD CORNWELL is the author of the acclaimed New York Times bestselling Saxon Tales series, which includes The Last Kingdom, The Pale Horseman, Lords of the North, Sword Song, The Burning Land, Death of Kings, The Pagan Lord, and, most recently, The Empty Throne and Warriors of the Storm, and which serves as the basis for the hit television series The Last Kingdom. He lives with his wife on Cape Cod and in Charleston, South Carolina.

“The final battle is one for the ages, bursting with gory detail and flush with savage death as the wolves of the shield wall smite his enemies.”
— Lee Scott, Florida Times-Union

“As with all his previous books Cornwell grabs your attention right off the bat. His masterful style pulls you right in.”
— New York Journal of Books

“The battle description might well be Cornwell’s best yet, which is saying something. Fans do not want to miss this episode.”
— Bookloons.com

“The most prolific and successful historical novelist in the world today.... Mr. Cornwell writes as if he has been to ninth-century Wessex and back. . . . Much has changed since the ninth century, but some things, and some feelings, are timeless.”
— Wall Street Journal

“Our hero is Uhtred, a good-hearted lout with a pleasantly sour disposition; he’s like a 9th century Han Solo.”
— Time