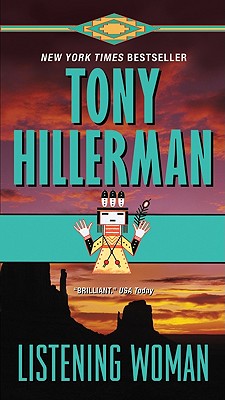 This is book number 3 in the A Leaphorn and Chee Novel series.

“Hillerman’s mysteries are special . . . Listening Woman is among the best.”— Washington Post

The blind shaman called Listening Woman speaks of witches and restless spirits, of supernatural evil unleashed. But Lieutenant Joe Leaphorn of the Navajo Tribal Police is sure the monster who savagely slaughtered an old man and a teenage girl was human.

Now the solution to a horrific crime is buried somewhere in a dead man’s secrets—and in the shocking events of a hundred years past. To ignore the warnings of a venerable seer, however, might be reckless foolishness when Leaphorn’s investigation leads him farther away from the comprehensible . . . and closer to the most brutally violent confrontation of his career.

TONY HILLERMAN served as president of the Mystery Writers of America and received the Edgar and Grand Master Awards. His other honors include the Center for the American Indian’s Ambassador Award, the Spur Award for Best Western Novel, and the Navajo Tribal Council Special Friend of the Dineh award. A native of Oklahoma, Tony Hillerman lived in Albuquerque, New Mexico, until his death in 2008.

“The only mysteries I read are Hillerman’s.”
— Ursula K. Le Guin

“A good exciting mystery that has everything.”
— Pittsburgh Press

“Hillerman’s mysteries are special . . . Listening Woman is among the best.”
— Washington Post